On 23.07.2015, the Centre for Entrepreneurship Development (CED) in association with the Green Brigade Eco Club of CEG had invited S. Sundar Rajan for an awareness lecture on Organic Farming. 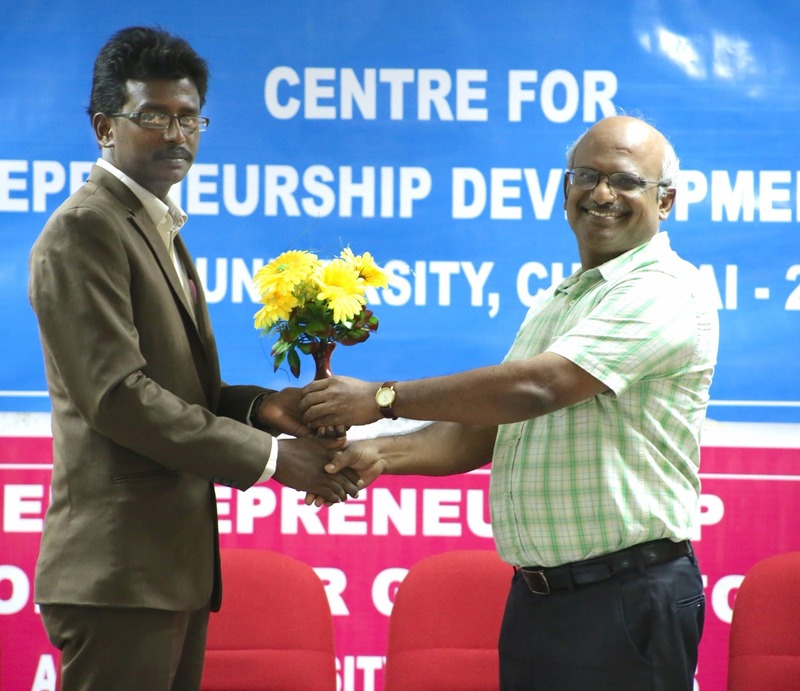 The event began with a welcome address by Dr. E. Natarajan , Staff Advisor - Green Brigade. He brought up the topic of sustainable and non-sustainable practises and deliberated their impact on the environment.

The stage was then taken over by Madhan, President of The Green Brigade Eco Club. He stated his visions for the club and listed out future activites they would be taking up.

Then Dr G. Ravikumar, Director of CED took to stage and announced that the CED-Green Brigade and Centre for Water Resources were on a joint venture for green organic farming on a one-acre of land behind Gurunath. He emphasized on the need to create an awareness among students on various entrepreneural opportunities.

And finaly Mr Sundar Rajan was called on to stage.

Having done absolutely no background search on him and being only aware of the fact that he was a farmer and a social activist (as stated in the poster), I wasn't surprised when a tall, lean, complex man walked on to stage.
A picture of my dad's village instantly flashed in my mind - a family of farmers.
Though in a light brown suit he looked slightly out of place.

He greeted us in 'sutha' Tamil, which was received by a roar of applause. He jokingly went on to say that wearing a 'veshti' and a slipper was what he was most comfortable in but he was coerced into wearing suit and shoes by Madhan.

Mr. Sundar Rajan had the audience at the edge of their seats throughout his lecture. His command over the Tamil language and the fierceness with which he expressed himself left us with a feeling of awe. Furthermore, his love for his country and his fondness for the language constantly resurfaced during the course of his talk. 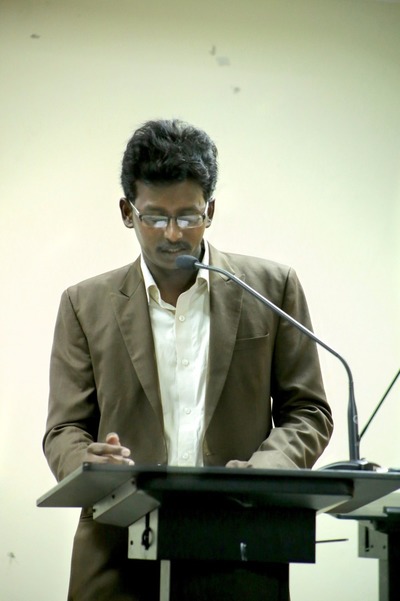 Mr. Sundar Rajan has had 7 years of experience in green farming. He completed his B.E in Electronics and Instrumentation in Annamalai University. As a member of Poovulagin Nanbargal, Mr. Sundar Rajan has been in the forefront of many struggles, the latest being the struggle against the Nuclear plant at Koodakulam in Southern Tamil Nadu. A certain incident in his life, had disturbed him so much so that he had decided to translate his passion into actions and do his bit for the earth.

He said, in our attempt to ape the foreigners we have gradually strayed from the traditional agricultural practices and methods, eventually leading to a sedentary lifestyle. Irrigation and pure agricultural practices that prevented spread of incommunicable diseases have now been transformed into communicable diseases. Americans bought cowdung  (once our main source of manure) from us and imported iron, magnesium and potasium fertilizers into our land. The unscrupulous usage of a fertilizer called endosulfan has created adverse impact even worse than the Hiroshima - Nagasaki catastrophe, he added.

"With due respect sir even the air conditioned room that we're seated in now is artificial. Take this mic and podium away and come sit outside, I can adress a crowd of three hundred students."

The staggering statistics as stated by him was quite baffling. India's 30000 varities of rice have been reduced to a mere 189 today. Varities like Mapillai, Samba, Karunguruvai have been pushed to dormancy. Instead hybrid varities have been forced into our localities. While we once had 684 variants of traditional cereals and grains it has now shrunk to just 19.

He fervently asked us how we could harm our Mother Earth who has been our haven for generations. He warned us that disturbing nature's equilibrium would only result in an impending disaster. And that polluting Earth to impotency would only make us sterile (literally).

I am pretty sure all of of us left through that door with something to think about and also feeling a little proud of our identity, as that kind of passion was nothing short of inspiring.