Every engineering student has a number of graphs drummed into his head by the time he completes his studies. Be it the ubiquitous normal distribution curve or the stress-strain plot for a structural steel, graphs follow students around regardless of year or department. To supplement these extant graphs, here are six entirely unscientific ones that might be of use to a student who has been tired of seeing the current and voltage characteristics curve of an NPN transistor for the umpteenth time: 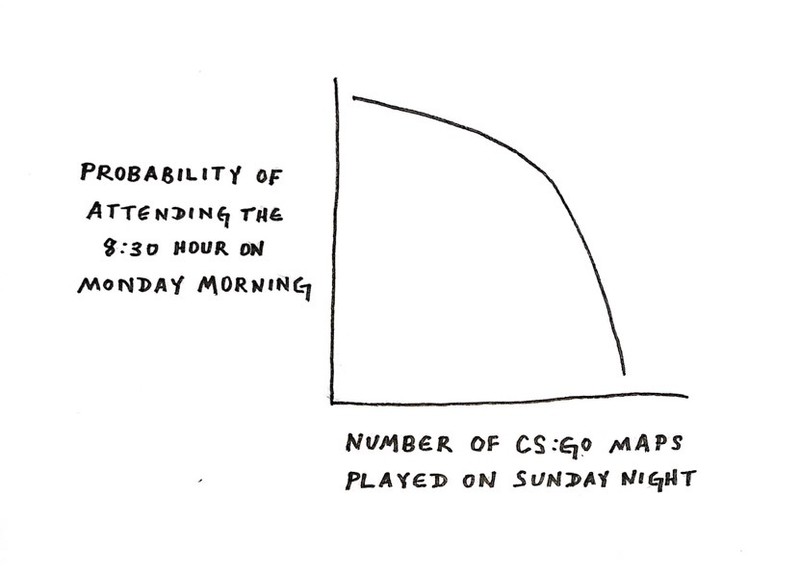 After a tiring week of classes, the weekends are the perfect time to get some rest, let your hair down, and of course, get those 360 no-scopes in a tense late night multiplayer match of Counter Strike: Global Offensive with your fellow hostelites. Trouble is, the more maps you play, the less likely you are to hit the hay before dawn, and getting out of bed at 10 am is a good way to miss the 8:30 am class. 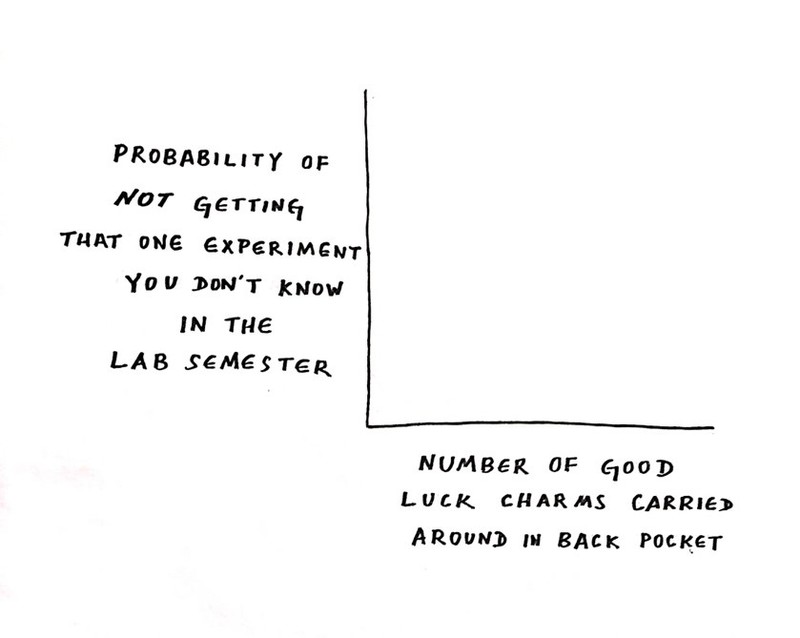 You wish upon a star. You carry a lucky button around with you all the time. You make sure to stay clear of black cats, mirrors and ladders. And yet, there it is, on the question paper for your semester laboratory, that one question, the sole experiment you didn’t know how to do, for whatever reason. That one you thought you’d never get in the exam because you had a lucky four leaf clover. But you did get it, making the graph is sadly coincident with the horizontal axis.

Maybe next time you could bring your lucky dice into the laboratory? 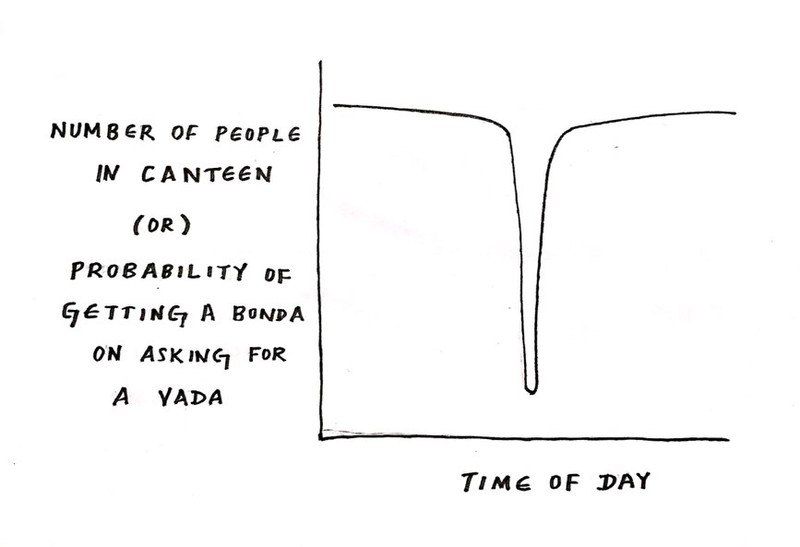 Science doesn’t really have an answer to this one. For any given day, there exists that window of just a few minutes anywhere from ten to twenty minutes before the lunch hour, during which you can walk into an almost empty canteen and order a dosa and vada, to get a steaming hot serving that rivals the offerings of the best hotels in the city. Miss it, however, and you have to wade through a massive crowd of hungry patrons before you get your token for the dosa and vada, and end up getting a chapati and a bonda instead. 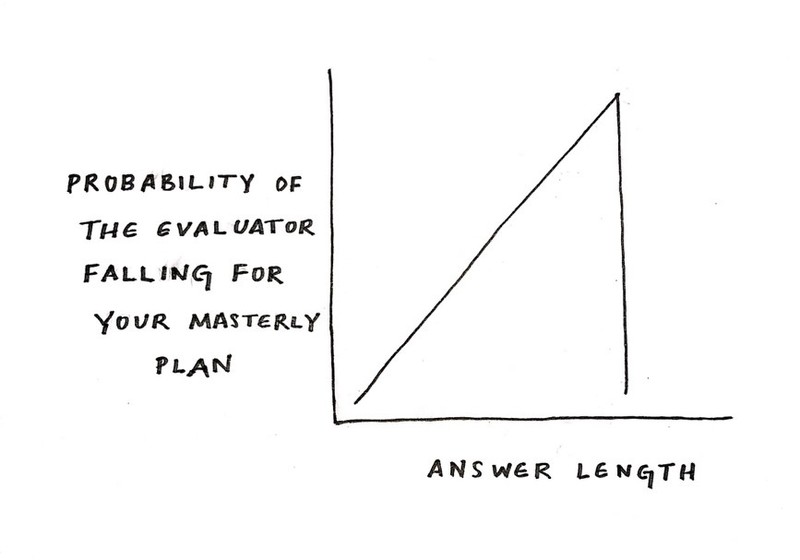 Most of us have a couple of questions in the semester paper that we do not know sufficiently well enough to be able to answer with any degree of conviction, yet dare not skip for fear that its omission might prove a costly mistake. It is at this time that all the Shakespeare, Dickens and Dumas in us rises to the surface, and we begin to spout forth page after page of barely relevant balderdash.

The levels of creativity and linguistic ability we can summon up under these circumstances would doubtless astound the English teachers from our school days, but as the graph shows, the efficacy of this technique is dependent on the magnitude of our verbosity only up to a certain critical answer length, beyond which the evaluator snaps, and scratches the whole thing out. 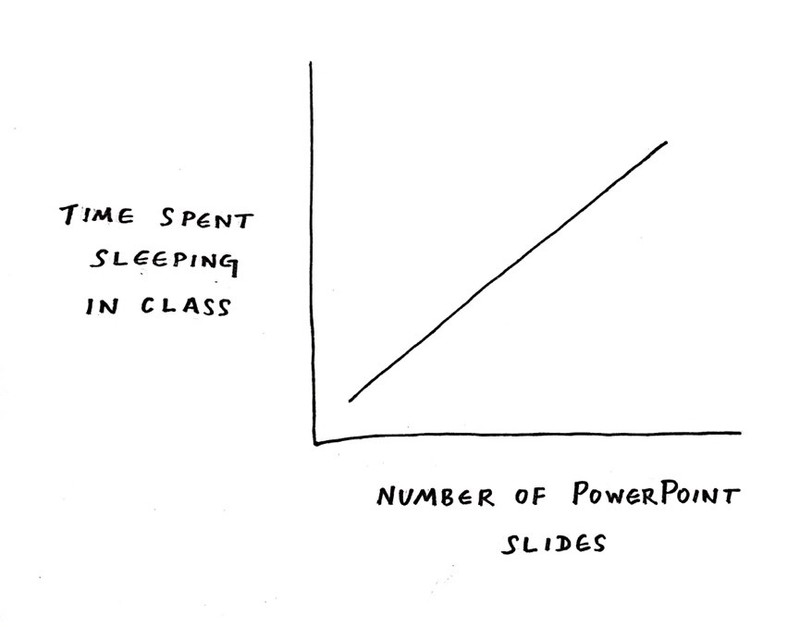 There are effective aids to teaching, and there are not-so-effective aids to teaching. And then there’s PowerPoint, a marvellous tool doubtless, but one that has been used in classroom lectures for so long and for such extended periods that its usefulness has long since been outlived. In most cases, it now seems to serve as a strong sedative for students, especially in the postprandial classes during the summer. The graph shows an unequivocal cause and effect here that drives that point well and truly home. Perhaps the students would wake up now and then if the transitions between the slides were set to “Nuclear Holocaust” or “Supernova” at maximum volume.

Sadly, they are not.

6. The Most Aggravatingly Relatable Graph of All Time 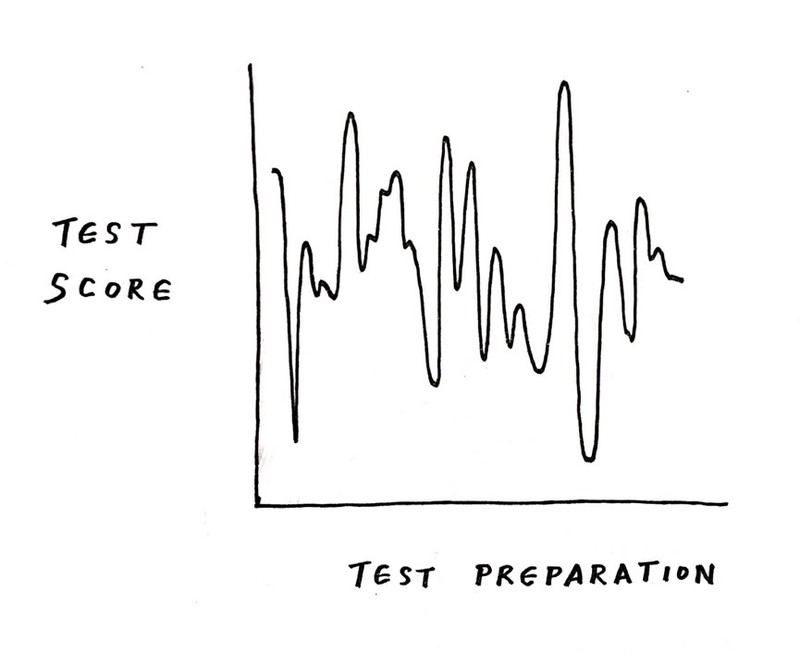 Sometimes, life can get unbearably unfair. Never is this more evident to a college student than when he gets his corrected answer scripts back. Instead of showing a simple linear relationship between litres of midnight oil burnt preparing for the test and the score you are handed out, the graph is confoundingly random, seemingly affected by a profusion of factors, including the weather, the SENSEX, the amount of sugar in the bus driver’s morning coffee and the current distance of Jupiter from the Sun.

Many a student, having received a grade bearing no relation to his efforts, has contemplated pursuing further studies in Chaos Theory, deciding that if a butterfly flapping its wings in Brazil could set off a tornado in Texas, then it probably had something to do with his inexplicably abysmal grades in Digital Signal Processing as well.