I’m sure you have heard a lot of rave reviews for the new Aamir Khan movie, and I am here only to add to the reasons why this movie is a must watch.

Aamir Khan plays an alien in the movie, but really, the whole ET angle is a mere plot device. It’s only there to legitimize the questions asked throughout the movie. Which human being would dare to question religion? Religions, which whether we want to believe it or not, influence everyone every day in Indian society. Which sane person, having grown up in our world of conflicting love, hate and bigotry would question the foundations of the very same society? Only little kids ask the questions that really matter. Innocent kids who don’t really know the self-imposed rules of the world, and tipsy yet peaceful research aliens from remote planets. So that’s PK (meaning tipsy). From a planet where the humanoids roam nude and free, and telepathically communicate with each other. (Utopia indeed), so of course he is baffled when he lands on Earth, in India of all places, where even her own citizens are just as confused. 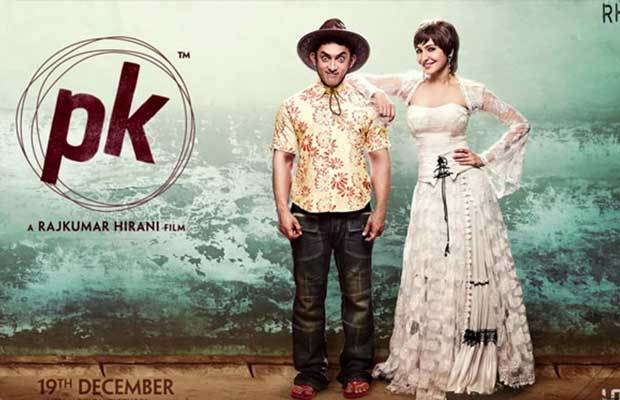 ET needs to get back home but sadly his elf ears and USB arms (for extreme filesharing like whole languages, conveniently necessary flashbacks, plot driving elements etc) aren’t much help navigating the complexities of Indian society to find his “remote” which will take him back home. His extremely entertaining learning curve, helped by Bhairon Singh (Sanjay Dutt) and a prostitute (Reema Debnath) take him to Delhi. When he explains his predicament to a few, they point him to the easiest and most widely sought out solution in the country, Bhagvan. And thus begins his quest in search of God, who in a country like India you’d expect it quite easy find, but perhaps more difficult to find because it’s India.

Enter Jaggu (Anushka Sharma), a journalist still recovering from a failed relationship from her Belgian escapade with Pakistani Muslim Sarfaraz (Sushant Singh Rajput). She hears Pk out and on being convinced of the truth in his story, vows to help him retrieve his remote, which is now in the possession of godman Tapasvi Maharaj (Saurab Shukla), who claims it to be a divine bead from the Gods themselves.

There are some clichéd gimmicks here and there, dancing cars, and forbidden love, but the crux of the film is hidden in some of the dialogues. Pk is a film about truths. Truths that we sometimes conveniently overlook, ignore, and vehemently deny. This film lays it all bare for the world to see. Forget the world, it’s for us to take a good look at ourselves. Pk is a film that we should be proud of and ashamed of at the same time. Proud of the diversity our country boasts, in terms of people, customs, and faith, ashamed of the discord the very same things sometimes bring. Rajkumar Hirani has the unique talent and brilliance of showing us exactly what is happening in our society, without foregoing the elements of magic and masala that make a Bollywood film.