“Everything you can imagine is real and everything that you see around would be someone’s imagination.”

Co-curricular activities have proven to contribute to students’ social well-being. They are also platforms where students can express and show their progression in terms of what they’ve learnt in a cubical lecture hall.

With this idea, Pixels – The Official Photography and Videography Club of Anna University, inaugurated their club, and made it a well-crafted event by giving an insight on photography. With support from the office bearers and well-wishers to our students in the same domain, the event started at 5:30 pm on 29th December 2016 at The Turing Hall, CSE Department.

The event commenced with the Tamizh Thaai Vaazthu, followed by the welcome address by the Club President, Smrithika Sasidhar, 4th Year, Manufacturing Engineering. The next proceeding was a quick note the watch-word of Pixels, by the Club President, Michael Jernil, 4th Year, CSE Department. He promised, “In addition to the contents of the curriculum, the workshops and events the club conducts itself is a learning tool. With successful sponsorship and effective task sharing techniques, the club assures informative workshops throughout the academic year on the co-operative side and will also have a competitive side by organizing events and competitions, which is the high-point priority for photographers around the university”. 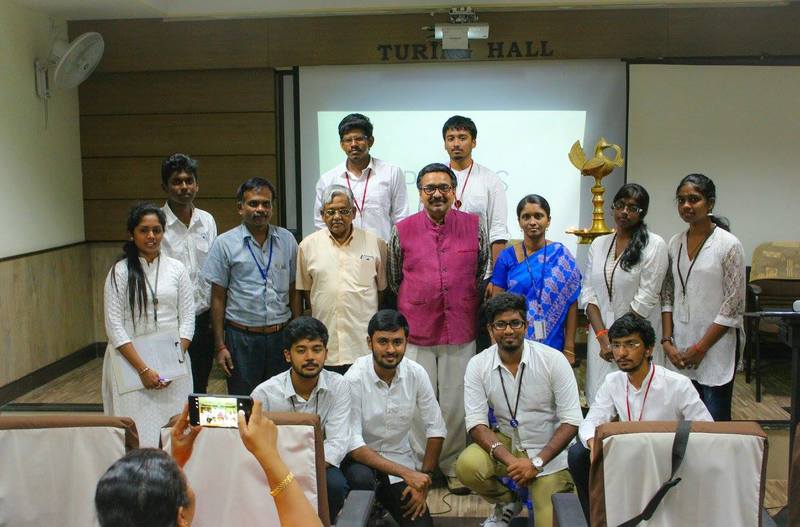 As a symbol of elegance and spirituality, the kuthuvilakku was lit by the chief guest Mr Ramana Kumar, President of The Photographic Society of Madras along with Mr Ranganathan Mulvadi, our College Alumni, Dr V.R. Revathy, Pixels Staff Advisor, from Media Sciences Department along with the Office Bearers of Pixels.

Next in line was an extended talk on photography with the help of a slideshow by the chief guest. “The best images are the ones that retain their strength and impact over the years, regardless of the number of times they are viewed. I think that emotional content is an image’s most important element, regardless of the photographic technique. Most of the work I see these days, lack the emotional impact to draw a reaction from viewers, or remain in their hearts. A landscape image cuts across all political and national boundaries, it transcends the constraints of language and culture”, he opined.

This continued with a humorous speech by our Alumni, Mr Mulvadi. “Photography is a love affair with life. One of my easiest but best pictures featured on Kumudham’s front cover, which I would always count as my best work till date. I wish you people, all the very best for your future endeavours and achievements within and outside the club” were his encouraging and thought provoking words.

The event concluded with the offering of appointment letters to the Office Bearers under various post such as President, Secretary, Joint Secretary, Design Head, Content Head and Marketing Head. The vote of thanks followed (rather appropriately) by a photo-shoot, completed the inauguration of Pixels. This marked the start of a new club, and the untiring people of Pixels were ready to tackle their upcoming work.

The Guindy Times congratulates the immense effort taken by the people behind Pixels and  wishes the team all the best for their club.