My whole world stopped as my eyes fell on that black hole. I was drenched in cold sweat and I felt my knees go weak. I frantically tried to run as far away as I could. But that image of that endless black hole was etched into my mind. I felt the bile rise to my throat as I desperately looked left and right for a restroom. It was all so sudden. It was too much to take in. But before we get into that, I’d need to tell you a completely different story first.

It all started with a trip to Gurunath. We only had fifteen minutes, so we decided to take the path along the side of KP. As we made our way, I looked ahead and I saw this massive jet of water falling from the sky. Naturally, I assumed that it was coming from some broken pipe on the first or second floor and moved around it. Unfortunately, I’m not the most coordinated person, and some water splashed on my arm. Just to be on the safe side, I wanted to see where the water was coming from. I mean, hey, who wants to walk around all day smelling like a bathroom? So I stopped, and looked up. Ok, so maybe my first assumption of the water coming from the sky was a little off. It was coming from a tree. I was never that great at biology back in school, so I thought it was some freak nature accident and that the tree had managed to genetically evolve and produce that much sap. As I stared and tried to overcome this sense of amazement that I was lucky enough to be watching this and should probably be contacting national geographic or something along the lines, my common sense decided to kick in.

‘No Keerthana, we know you’re bad at biology but it’s impossible for a tree to produce that much sap’ 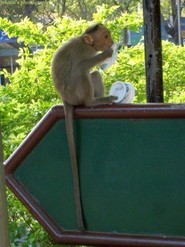 So if it’s not a broken pipe (shout out to the maintenance crew though) and it wasn’t a tree, where was it coming from? Taking a closer look at the tree, I started to follow the stream of water to find the source of both the water and my troubles. And I did find it coming from a hole. Sadly, I didn’t expect that hole to be at the back of a monkey. Yes, a monkey peed on me. It was just crouching on the tree and peeing with all its might. Just to spite me. It was like the universe was trying to tell me that all my good days were up and I wasn’t entitled to anymore. I mean, you’d think a creature that was smart enough to open water bottles on its own and eat ice cream by the cone would have the sheer decency to pee on the ground and save me and a million other innocent souls the constant fear of having to look up whenever you walk under a tree, but NO.

So next time someone’s complaining about how a monkey stole their juice or how bad of a day they’re having because a crow peed on them, I hope you’ll find some consolation in the fact that I had it worse than you. Because crow pee is just way too mainstream.