The most awaited bash of the year, the Techofes Awards kicked off at the grounds of Anna University on 5th March, 2016 by 7 pm. VJ Diya and Rakshan of Vijay TV fame hosted the ceremony. The show ignited with a classical performance by dancers from the Athma academy. Proceeding that stupendous staging was the award ceremony for which several celebrities like K.S. Ravi Kumar, Jayam Ravi, Mohan Raja, Atharva, Santhosh Narayanan, Nikki Galrani, Aishwarya Rajesh, Arun Vijay, RJ Balaji, Lyricist Thamarai, Shakthishree Gopalan and Nivedha Thomas graced the stage. The audience went into a frenzy when a few of them were sportive enough to shake a leg on the stage with the hosts. Each and every one of them felt cherished and expressed their gratitude to be opted by students for an award and inspirited them to live their dreams.

The evening also had aspiring singer and student of CEG, Anna University, Ms. Aparna Narayanan, the voice behind the recent sensational hit "Thalli Pogadhe" giving a delightful and soothing recital of A.R. Rahman's melodies. The Aakriti dance team rendered a very power packed performance to entertain the audience. CEG Spartans were no less when they delivered a very distinctive act which was a tribute to music maestro Ilayaraja. Other than the usual elements of a variety show, they also played with shadows which was a treat to the eyes. The evening concluded with a rib-tickling mimicry feat by the duo Naveen and Satheesh of "Kalaka Povadhu Yaaru" fame.

Ultimately, Techofes Day 2 was a star studded evening with a mélange of elements needed for an alluring night that kept the entire crowd exhilarating throughout!

A few celebs had a minute to spare to share their thoughts with the Guindy Times' Correspondent Akshaya Raju: 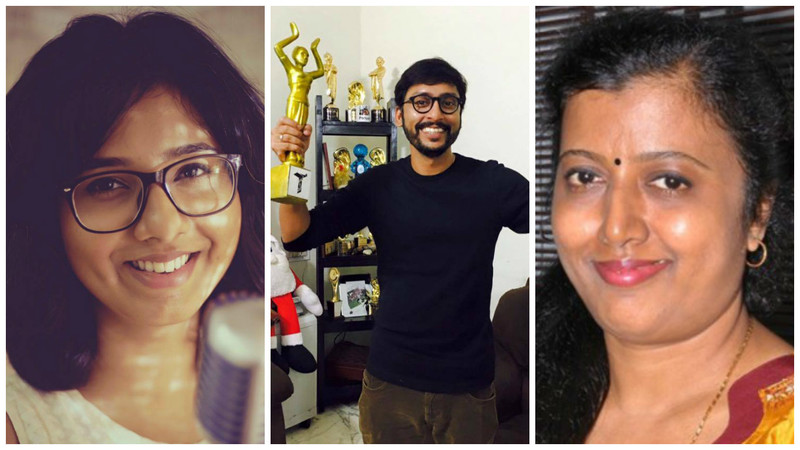 There are more things to life than movies! Keep yourself alive!
LYRICIST THAMARAI:
கனவு காணுங்கள்...கனவுகள் நேர்மையாக இருக்க வேண்டும்!
SINGER SHAKTHISREE GOPALAN:
Students are connected with movies more than anybody else. It is thus an honor to receive awards opted and given by them!