The Leo Club of CEG unveiled their official logo for the Leo Utsav, their annual event done by the Leos for the non-Leo students in the campus. The launch took place in a closed ceremony at the Dean’s office and Dr. P. Narayanaswamy, Dean – CEG, unveiled the logo. After the launch, he also enquired about the activities of the club and how different Leo Utsav 2016 would be from its predecessors. 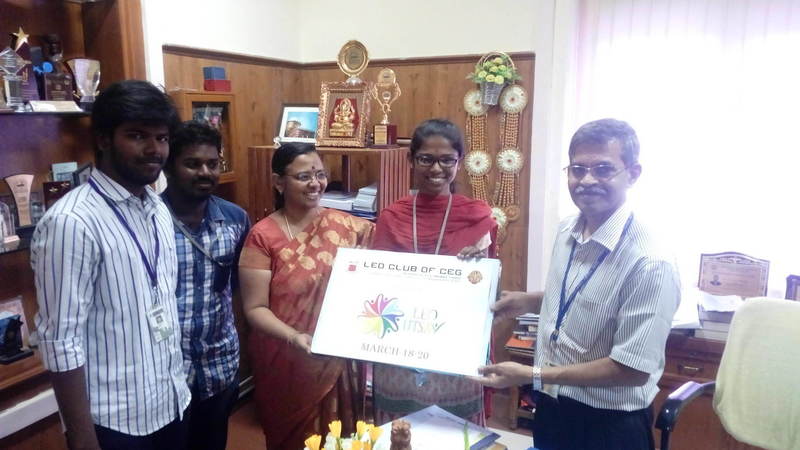 The staff advisor of the club, Dr. P. Vanaja Ranjan, Professor, EEE Department, Vice President Vijayabharathi (final year Mechanical Engineering) and a few other members were present during the ceremony. When asked about the theme and concept behind the logo, Suhashini (third year Agricultural Engineering) said, “The flashy rangoli symbolises a festive mood and conveys the euphoria behind Leo Utsav. This time, we are collaborating with a little-known NGO called Vinmeengal, who are helping out underprivileged students studying in Government schools by conducting career guidance and personality development programs meant especially for them.”

‘Utsav’, literally meaning ‘celebration’, is going to be held between March 18th and 20th, 2016. It will comprise events like Gamindrome, Kollywood quiz, Mehendi, Badminton Arena, Creative Writing, Tamil Debate, Food Mania apart from the online events like Meme Creation, which have already started.