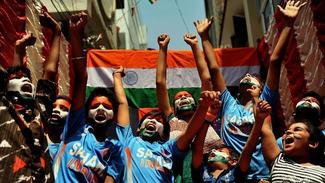 With a crucial semifinal stage match going on in Australia, patriotism in the country is reaching the highest level. Students and teachers alike are being swept up by the World Cup fever. Despite whatever classes, labs or tests there maybe, a large part of the student population is in the comforts of their homes or hostels watching the match in progress. For some, the consequences of bunking is likely to be worse than others, and so, with the best interests of the ardent fan at heart, facilities have been made available to obtain fake medical certificates for all those who require it. "I've been glued to the TV since the toss, and I'm not moving till we've won, no food, no water!" proclaims an enthusiastic first year student from his hostel. "I came all the way from my house in Avadi, just to attend an important lab class, only to find the entire class empty. No students, no lab assistants, no professor!", fumes a girl who has clearly been living under a rock. Whether student, professor or working professional, you can obtain your medical certificate dated 26th March 2015 with the illness of your choice by simply emailing the details to IAmASickPatriot@wewontgiveitback.com. Bleed blue folks!