I was bullied, but I was bold. I was bold to face it, bold to talk about it and now bold to share it.

It all started when I moved to a new school in Singapore, from India, in ninth grade. It was a very new environment and I was shy. This was perhaps due to the drastic change in place, people and peers. I had already missed two months of the syllabus and I spent my first month coping with academics. 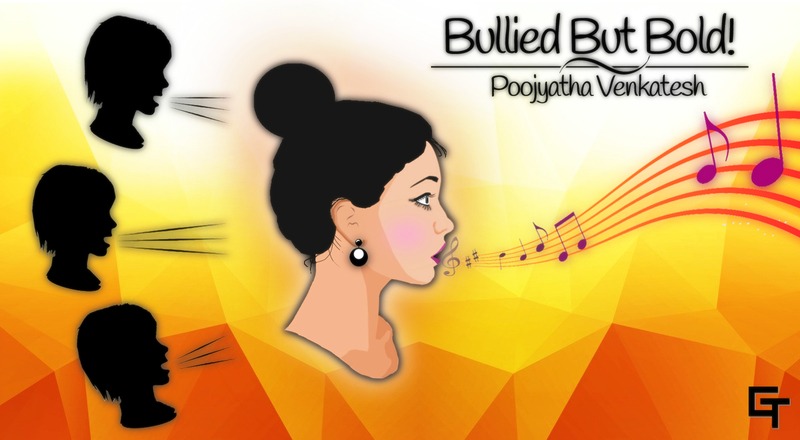 My classmates were engaged in their own world of having fun. I was inconspicuous in the classroom and did not interact with my peers. As time passed, I realized that I didn't want to be the same anymore. Hence, I tried mingling with the so called ‘smart’ girls in the class. Like another kid of my age, I too wanted to hang around with the class toppers. In the beginning, they seemed friendly but were more engaged with their own circle of friends, not really open to accepting me. This behavior seemed weird to me. I had changed schools quite frequently in the past. My first day in every new school was completely different from how it was here. In my earlier schools, I had children gather around me since I was new! I made friends within minutes. I was very soft spoken back then and that hadn’t changed at all. In the new school I was still soft spoken and affable. Yet, I couldn’t think of a reason why the girls in the gang I tried to get close to and be part of, didn’t want to accept me. Perhaps it was because I was not very ‘interesting’ to them, or because I was not humorous and was just a timid girl in the crowd who did not stand out for anything. Slowly, they stopped including me in the activities they were up to and I was ignored. For the first time, I genuinely felt lonely and that hurt deeply – I returned home from school depressed, each day.

Even though my peers were sardonic to me, I went out of my way to be friendly and helpful but ended up getting insulted. Slowly, I started hating going to school and every day I would stare out of the window and wait until I could get back home. This continued for a very long time. For me, school was fear (of not being accepted socially) and a place where I was uncomfortable. My parents and teachers were my best support. But let me tell you one thing: no matter what the teachers tried doing, the attitude of students never changed!

I was still determined to get out of this situation and was on the lookout for the right opportunity. I was told that there was an annual event called ‘Class Assembly’ that helped students showcase their talent. I thought it was a nice platform to showcase my talent in Carnatic music.  I secretly approached my class teacher and asked if I could sing the invocation song. The secret approach was due to my fear of my so called ‘modern’ classmates, who wouldn't really approve of me singing a classical form such as Carnatic music. I was very determined to make this happen. The day came, and I did sing, and my teacher was elated. In fact, my classmates were also quite impressed. Surprisingly, many of them appreciated me and that made me feel more confident. Since then, I experienced a less hostility. However, things didn’t change completely, but I at least gained the mental determination to fight and conquer life alone, instead of being with a group of people who hardly respected my presence. At various such occasions, I proved that I was quite skilled through seminars, artwork, and singing. I decided to be bolder and leave behind being shy and soft, which only seemed to do more harm than good in this environment.

Two years later, my classmates changed. I had a new set of classmates along with some older ones, of course. Life was slightly better. Over time, I made a couple of really true friends and the next two years were the best school years of my life! I’m grateful that I got the best friends who made my life fun. However, the insults never stopped completely and I realized that there were always going to be people like that. Gradually I learnt to manage tough such difficult situations. I realized that while education is very important, manners, etiquette and culture are even more important.

No kid deserves to be bullied and everyone is special in their own way. Every human has their own hardships and one should never add to them. Students who still experience bullying today, please find ways to come out of it. Go ahead and let your parents, teachers and loved ones know about what you are going through. Pease don't suffer in silence. School life and life in general should be enjoyed to the fullest and it’s our responsibility to not let anyone close enough to hurt us and make ourselves feel worthless! Have the courage to fight back even if it means fighting alone. Conquer life instead of just surviving it!

Tagged in : My space, Poojyatha Venkatesh,