As College of Engineering Guindy stands just two months away from completing its 222 years, the Alumni Association, AACEG celebrated their 91st Alumni Day  on 20th of March at CEG. There can’t be a more befitting description of being the Alumni of this prestigious institute than First you’re a part of it then it becomes a part of you. 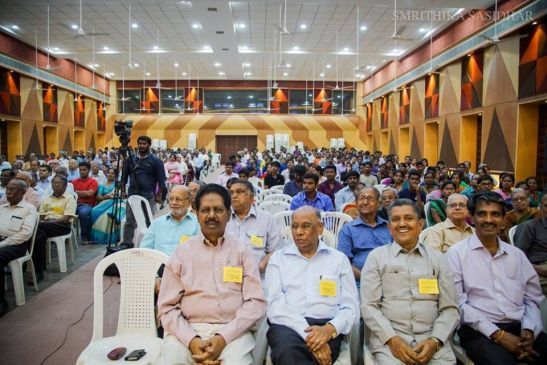 The evening saw Alumni of various ages from numerous batches,  arriving eagerly to relive their golden days in our campus. The day started when a variety of games were conducted at 3pm for the folks over there. After all, everyone needs some fun and frolic to show that, no matter how many years pass by, the child inside us would never die! Almost everyone enthusiastically took part in a lot of games including Gilli, Pallanguzhi, Frisbee, Marbles and Carrom . Laughter filled up the whole place and a child-like excitement was seen in everyone’s faces , no matter whether they scored or missed. That was the degree of exhilaration over there which made the evening worth remembering.

The Alumni Day Function started at 5pm at the Vivekananda Auditorium. The Chief guest for the evening was Prof. Dr.M.Rajaram, Vice-Chancellor, AU. The welcome address was presented by Dr.P.Narayanasamy, Dean, CEG. He spoke about the up-coming Pond project which proposes water supply for at least 6 months which would be a boon for the students and the institution and he felt proud that the Alumni were doing a great job.

The Presidential Address was delivered by Er.B.Karunakaran, President, AACEG. He shared a small experience wherein on being introduced to the Consulate general of Japan he was informed that in Japan they cherish heritage and that it is indeed a proud fact to be an alumnus of such an institution. On mentioning the up-coming of the Incubation Centre for Startups he added that they were sure that they will have at least 50 startups coming up in a year out of which at least 3-5 will reach great recognition.

The Alumni Day Address was given by Er.K.Vasudevan, Joint Managing Director(retired) of GEC ALSTHOM. He felt grateful that the fame of the college and the original architecture of the college is still being maintained. He shared anecdotes of his life in the college, his experience being the captain of the cricket team and competing with PSG college of Coimbatore. He commented on the development of the college over the years adding that, with only 5 branches of engineering and a fee of Rs. 230/- in 1957, the college has grown massively where now, the fee is nearly 1.5 lakhs annually with a wide range of engineering courses. 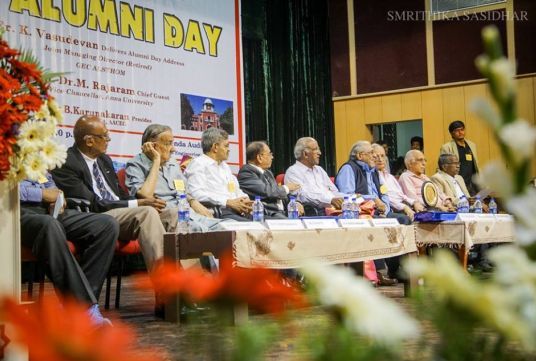 Distinguished Alumnus Awards was distributed to the following Alumni:

Er.Namesivayam Raghuraj, 1963-Mechanical batch. Honored with Dronacharya Award by Rotary Club of Madras in 2014 for exceptional services in the field of skill development and vocational education.

Er.P.V.Parthasarathy, 1961-Mechanical batch. Having been an active Sportsman in his College days, at the age of 45, he created a new Asian record in 400m hurdles and he still receives awards and sets records.

Dr.T.S.Vijayaraghavan, 1962-Electrical & 1963-Mechanical batch. Retired IAS officer, he is the first IAS from CEG who cleared the UPSC exams in 1965, his first attempt, with All India 2nd rank.

Dr.N.S.Srinivasan, 1955-Highways & 1956-Civil batch. A textbook in the field of traffic and transport engineering, he is acknowledged as the man who brought order to the roads of Delhi for his excellent transportation plan. He received a lifetime achievement award from The Indian roads and transportation authority.

Students Abhishek, Sudar and Saravanan represented Students Union, CEG Tech Forum and Arts Society respectively to speak about the Alumni Association connect with students. They spoke about how AACEG have been pillars of support for a plethora of activities ranging from sponsoring for events to recently providing funds for the flood relief. The Octogenarian Alumni were honored by the dignitaries with utmost respect. Scholarship, Endowment and Merit awards were distributed to students of CEG followed by the prize distribution for the sports activities. The evening concluded with the Vote of Thanks from Er.M.Shanumugam, Secretary, AACEG.