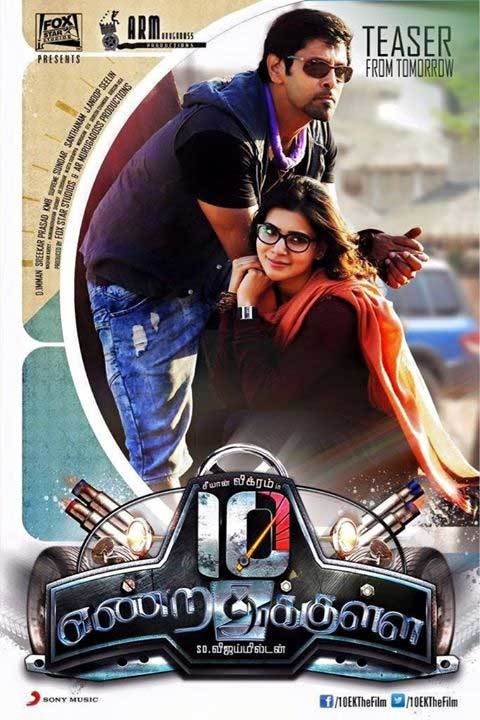 There is always a difference between an expert hanging a picture and Uncle Podger doing the same. The former usually comes out good while the latter, despite hardwork from the entire team, fails to impress. That’s how Lingusamy’s Paiyaa and Vijay Milton’s 10 Endradhukulla stand, respectively. Vijay Milton, like every other director of Tamil cinema who wishes to explore different genres (such as what Sargunam did with Naiyaandi and Lingusamy with Anjaan), has attempted to express himself as a commercial director capable of making movies for the fans and whistling youth, but the film does little as an endorsement.

The film has its flow taken from various Indian movies, such that if allotted a column for ‘Based Upon’ in the title, it would exceed the number of the crew members (which is scrolled down towards the end of every movie). We get to see glimpses of Rachaa, where Ram Charan plays Betting Raja, in the beginning; there’s Paiyaa throughout the movie; and there’s also a bit of Thiruda Thiruda at the train scenes in the climax. Nevertheless, the only aspect that moves the screenplay forward is the presence of Vikram. One cannot stop wondering how this veteran actor manages to keep up his physique, smile and skills so evergreen, while the average fans (like me) gloat for Thala and Thalapathy.

The only aspect that moves the screenplay forward is the presence of Vikram.

The movie doesn’t really care about a factor called ‘story’ beyond a point, and the audience are left waiting with desperation on where the director is taking them actually till the interval block. The care taken to avoid any unnecessary duet between the protagonists goes out in vain due to the kuthu song, where Charmi does an item number, which can be termed an annoyance rather than unnecessary.

Samantha does her usual work of expanding the eyeballs too longer to express her state of wonder as well as haplessness, as she garners the role of a loose-mouthed girl lacking common sense (who no longer exists anywhere across the world, but for movies like these); however, Vijay Milton gives an unexpected, doppelganger-ish twist, which slightly lifts the movie’s sluggish pace.

Pasupathi performs a character, which he has already done in movies like Idharkuthaane Aasaipattaai Balakumara (starring Vijay Sethupathi) and Mumbai Express (starring Kamalhassan). But then, certain actors are experts of particular facets and this seems to be one of the fortes for Pasupathi; his dialogue delivery and body language provide both violent moments as well as lighter ones (For further visualization, imagine Vatti Raja played by Bobby Simha in ‘Neram’). But again, we have seen enough of these kinds of goons with senseless apprentices in movies across various regional languages of the country.

Just when the movie is about to end, one of the antagonists Abhimanyu Singh tells Vikram (who remains anonymous throughout the 145 minutes) about the main villain Rahul Dev. And, there comes the clichéd Tamil movie.

The editing has been done in a crispy manner, and Sreekar Prasad, as usual, stamps his feet strongly in his area; it is not an understatement to mention that the second hero of the movie is the editor.

The editing has been done in a crispy manner, and Sreekar Prasad, as usual, stamps his feet strongly in his area; it is not an understatement to mention that the second hero of the movie is the editor. Computer Graphics show a sense of hurry in their completion, and there are blasphemous CG moments like that where one villain holds a girl’s cut finger in his hand, and the other where a dismantled hand lies in the sand. This movie also, like Purambokku, starts off with a sensitive community issue, of the North in this case, but doesn’t focus too much in that; rather, this base story becomes dramatic because this is a masala movie.

Music director D. Imman has been showing signs of repetition recently and he continues the woeful form here also. For someone like him, who is not able to provide variety in terms of compositions, it’s better to be inactive for quite some time rather than composing soundtracks for several movies continuously (Perhaps, Imman and Anirudh can take a cue from Harris Jayaraj in this regard). There’s one track, which clearly resembles Oththa Kada Machan from ‘Paandiya Naadu’; and this one sounds really terrible for an introduction song, which demands some swag in terms of tune. Moreover, it’s unwise for someone to incorporate the same set of singers repeatedly in all the albums. Instead of concentrating on the inclusion of dialogues from old movies in his tracks, this man can perhaps focus a bit on his musical abilities, because at this rate, Imman would soon become Devi Sri Prasad v2.0.

Music director D. Imman has been showing signs of repetition recently and he continues the woeful form here also.

The stunt scenes are a delight to watch, though some of them are ridiculously unrealistic (we have been used to them, eh?). Kudos to Lee Whittaker for those mindblowing chase stunts. The dialogues, though not top notch, are worthy in bits and pieces. The scene where Vikram says, “Idhu Odinaa Mudiyara Vishayam Illa; mudichitu odra vishayam” (This is not something that ends by running away; this is something that has to be ended before we run away), captivates the audience to a greater extent.

Finally, Vijay Milton’s 10 Endrathukulla is a one-time watch for the unique locations of the North, the director’s entry into a different genre, and last but not the least, for the one and only Chiyaan Vikram.