“Care for a movie?” is a statement we often hear amidst college students. A day off resonates with a day at the movies. Almost every week, we catch up with a movie, be it good or bad. To say in short, movies rule college students’ life. 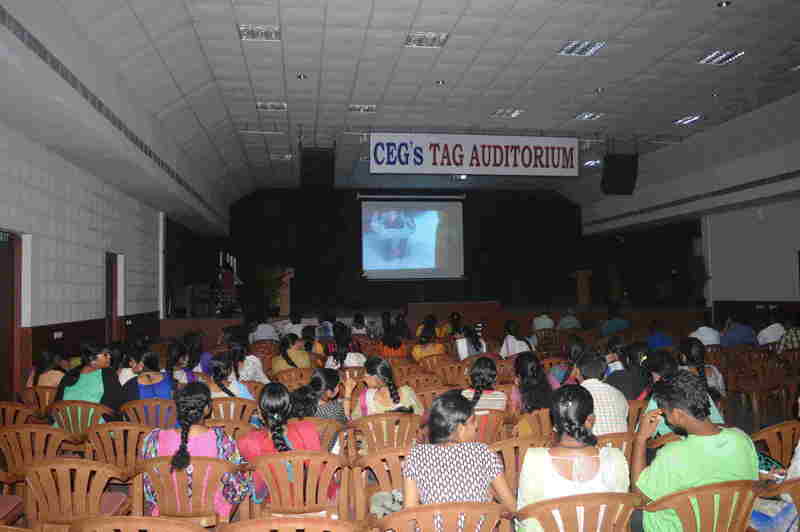 TAG Auditorium on the 9th of February turned a Cineplex exclusively for our college students. A movie screening was organized by the Green Brigade Club of CEG to spread awareness on Global Warming. “The Day After Tomorrow” starring Jake Gyllenhaal, Emmy Rossum, Dennis Quaid, Sela Ward and several others was screened for the students. “We wanted to create awareness on Global Warming and its consequences. And we thought it will have a better reach if it was told through a movie. Hence we decided on the movie screening,” says Madhan, the President of the Green Brigade Club.

The movie which showcases how the world comes to a standstill after a catastrophe hits Earth due to excessive global warming ignited a sense of responsibility in many students. Many of the first year students really enjoyed the movie, despite the fact that they have seen it before. They watched keenly, noticing tiny details and thoughts which they had failed to notice before.

The event was a grand success with the objective reaching out to a lot of people. The movie had instigated a lot of thought provoking questions regarding global warming and how to overcome it. The main objective behind the screening was received with a stupendous response from the students. As they exited the hall, murmurs of global warming and the movie were spoken about at length, eliciting a smile from the members of the club. Their aim had been perfect.