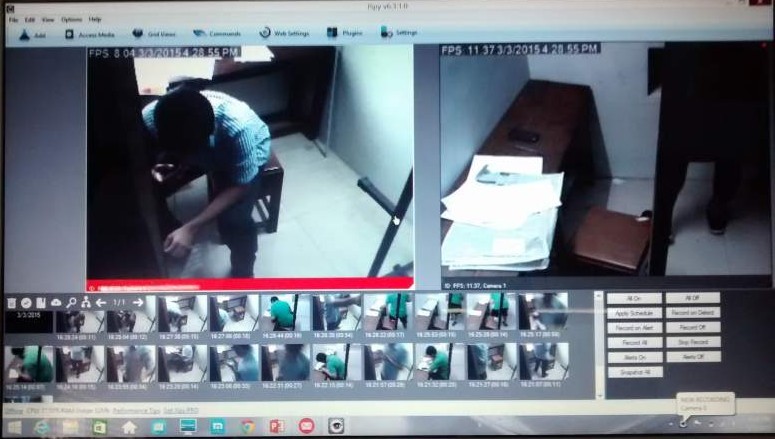 After Kurukshetra and Techofes, it’s now time for the department symposiums to take centre stage. The 33rd edition of Waves, the national level techno-management symposium conducted by the Society of Electrical and Electronics Engineers of CEG has come up with various events and workshops that provides a platform for students to exhibit their talents. One such event is ALCATRAZ that took place on 3rd March and involved logical and lateral thinking.

The first two rounds of the event tested the participants’ logical reasoning and analytical skills. In the final round, that took place at the Power Systems building, they have to trace the clues to hit the ultimate target of rescuing their teammate from a “prison”. Every team had 3-4 members and one among them will be a prisoner. Rest of the team should find clues within a limited time and try to get their teammate out of the prison. Though it may sound simple and nothing close to technical, the organizers infused their core expertise into it.

The prisoner is given a clue, for instance a newspaper with certain underlined words, to decipher. Once he finds it, he reach out to his team through an android application called “Android Intercom” that allows only one-way communication at a time. Every team was provided with two phones, one for the prisoner and one for the others, with the app installed. There was a separate Wi-Fi router for each team that blocks other internet sites, and establishes a unique connection. The team mates after getting the information run around the building to get the next clue and return to rescue the prisoner. This continued for almost an hour with 6-7 clues. The team which finds the key to the prison at the minimum time after cracking all the codes is declared the winner.

There were 4 teams that reached the Round 3 out of which two teams were declared the winners. Another cool aspect of the event was that the prisoners were put in separate prisons and were constantly monitored through cameras. The cameras were in turn connected to the organizer’s laptop which had a software called “ISpy”. This software senses the movement of the prisoners and it indicates when there is any rapid motion. One of the organizers, Gautham, said,

The reason behind using this technique is to find which prisoner panics the less and maintains a cool attitude. The more stressed he becomes, the more the points get reduced