A bright sunny morning with a very quick shower gave a new lease of life to the flora on campus today. But adding beauty to the college is not just the campus which is teeming with activities - symposiums, conferences, assessments, placements and culturals, but the golden hearts of the students here, who strive to make the world a better place. That’s what Vizhithiru is all about.

One could see a different scenario if he peeked into the event’s venue. Rightly named after one of the greatest minds of our country, the Vivekananda auditorium’s stage has been the starting point of many successful people in the past. But today it was full to its brim with over 750 students from various government schools across the city. Boys and girls were united only by the common school uniform but each was an amalgamation of colorful ideas and dreams and interests.

Vizhithiru, an initiative by the Rotaract Club of CEG, has been successfully conducted for the past 12 years. The event is aimed at kindling the fire in the fresh minds of school students and to steer them in the right path so that the students can pursue a degree program in their field of interest and shine radiantly. Analysing the problems faced by the student in choosing their career options, this event was started years ago to pull out the students from oblivion and show them the path towards glory. 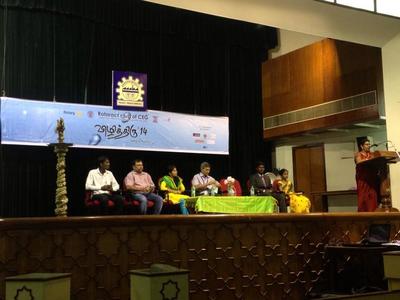 This year, the 12th edition of the event was inaugurated by the Dean of CEG Dr.Narayanasamy, Rotarian Chetan and Rotarian Asha from the Rotary club of Madras South and the other special speakers. In the inaugural address, The Dean of CEG, Dr.Narayanasamy spoke about improving learning skills. To one of his questions “Are marks the most important factor in life?” the whole audience echoed with an answer “YESSS”. Putting an end to their misconception, Sir clearly pointed out that knowing basic concepts is much more important than reproducing contents in text books.

This was followed by the special speaker Masha Nazeem, a young innovator who inspired students with her life experiences of how projects were  recognised and later brought her laurels. In her view “Take a path less travelled and the world will follow you “. Her innovations include hi-tech toilet system, flameless seal maker which simplified the tedious process of seal making to protect documents and also the foldable mechanical porter. Students were very much excited by the various opportunities science opens the gates for. Various events like extempore, drawing competions were conducted and the winners were felicitated later in the evening .

Another key speaker-Krishna Varadharajan, Chairman of Idea Plus, briefed the students on how to emerge successful in their 12th board exams. According to him, learning devoid of tension and stress is one of the key steps to attaining success. He spoke of taking an interest and finding creative ways to learn and remember lessons. Rote learning and "mugging" is never a solution. His speech was extremely jovial and the students definitely took many interesting points from is speech.

Following him was our alumni Mr.Pu.Ko.Saravanan who was also a Rotaract club member during his college days. He enthralled the audience with his motivational talk drawing references from the lives of great people like Walt Disney, A.R.Rahman, Charlie Chaplin etc who made it big amidst a multitude of challenges. He also stressed on the fact how knowledge is more valuable than just mere rote learning .

There was also an interactive session with the state toppers from our college. 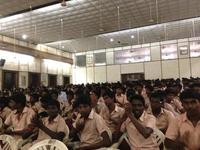 On interviewing the chairman of Vizhithiru, Mr.Aswin Anbalagan and Co-Chairman Sushmitha, they said that one of their major achievements was that over the past 12 years, students who had benefitted from the program are now students of this prestigious institution. They also extended their gratitude to all the Rotaract club volunteers for their arduous efforts in making the event a grant success.