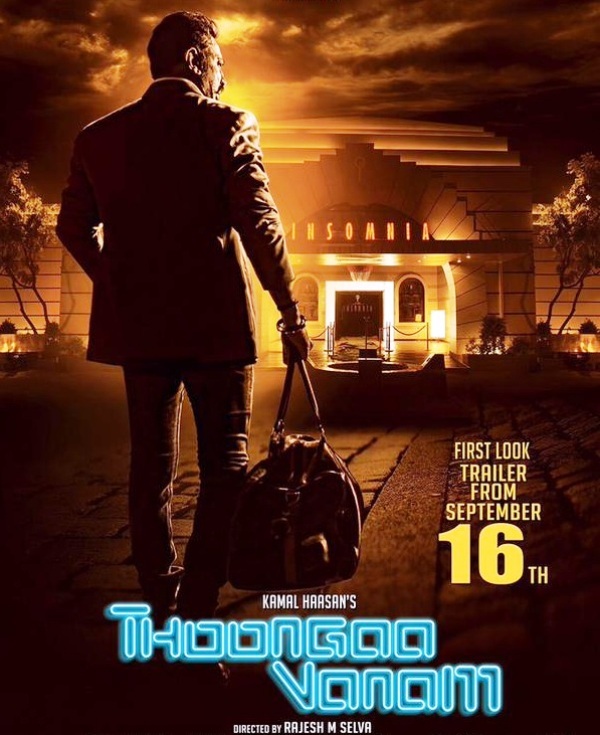 Kamal Hasan is an actor who throws a lot of surprises to the audience who go in to watch his films, most of them being pleasant ones.  But his latest venture ‘Thoongavanam’ is definitely not a film filled with lot of surprises. But the entire film as a package is one big surprise - The surprise of not being a usual Kamal flick.

The film is a (or tries to be)  portrayal of the bond between Dhivakar (Kamal), a middle-aged policeman and his kidnapped son Vasu (Aman Abdullah) and also partially shows the flip side of the life of a policeman. Kamal as Dhivakar, a cop working for the Narcotics bureau plays (or underplays) his character flawlessly but the director has failed to make the most of the legend. The character by design neither shows the fatherly connection with his son, nor the sincerity towards his profession. Maybe Kamal deserves a special applause particularly for playing the character without showing the normal intent that our protagonists display just to over emphasize the love towards their family or profession, but I doubt whether such a performance works as a positive for the film. He just comes across as just another cop whom we meet on our roads, always raising a doubt about his straightforwardness.

Mallika (Trisha) is another cop from the narcotics bureau (and a gorgeous one at that) who is more of the reassuring ‘filmy honest’ type. She fails to occupy the screen for long in the first half but makes a mark in the second half with a string of unorthodox scenes which can well be described as a ‘first of the kind’ involving the leading man and lady of a Tamil film. Vittal Rao (Prakash Raj) more fancily dressed this time, does most of the bad acts that he has done in the past but fails to frighten us as the antagonist. Pedha Babu (Sampath) is a bit more intimidating than Vittal Rao but fades midway through the film. Dhiraviyam (Kishore) plays a run of the mill cop roll in a crisp style and grows within the film from start to end. Vasu plays the role of a boy in his early teens to perfection. Mani (Yugi Sethu) has a role that spans only for a few scenes but it felt like irrespective of whoever directed the film or played out the character, those scenes couldn’t have made any more impact as the character itself wasn’t great to begin with. Aasha Sarath’s role as Sujatha has been wasted as Dhivakar’s ex-wife which is too plain a role for such a talented actress.

The story mostly is based at a night club in the city where police officers (honest and corrupt) faceoff with the drug mafia. The strong point is that the film doesn’t have the larger than life stunts or dialogues that are part of most action films today. However, the director fails to maintain a definitive mood throughout the film. It is clear that Kamal Hasan tries to be a doting father more than a honest cop in the film but the audience somehow fail to appreciate the father-son bond in the film as much as the director would have liked. Ghibran excels with the stylish and apt BGM scores but the very loud night club music which makes multiple appearances in the film is a pain. Sanu Varghese’s camera has recorded the most stylish angles for any Kamal film after Vettaiyadu Vilayadu.  The film as a whole is very neatly packed with intelligent screenplay. This film with any other actor (even with mediocre acting skills) as the lead would have surely been rated better but with Kamal Hasan as the protagonist it can only be rated as above average simply because the legend has been under-utilized and was made to be too subtle for liking. But it is definitely worth a watch for the action film lovers. For others, it also has a few Kamal touches (watch out for the sequence involving Santhanabarathy and the scene where Prakashraj asks Kamal “avanga Amma ketta enna badhil soldradhu?”).

P.S: Don’t miss the only song from the film which comes at the end, it’s just mesmerising.

Bottom-line: Just Go and enjoy “the surprise of not being surprised” by a Kamal film.