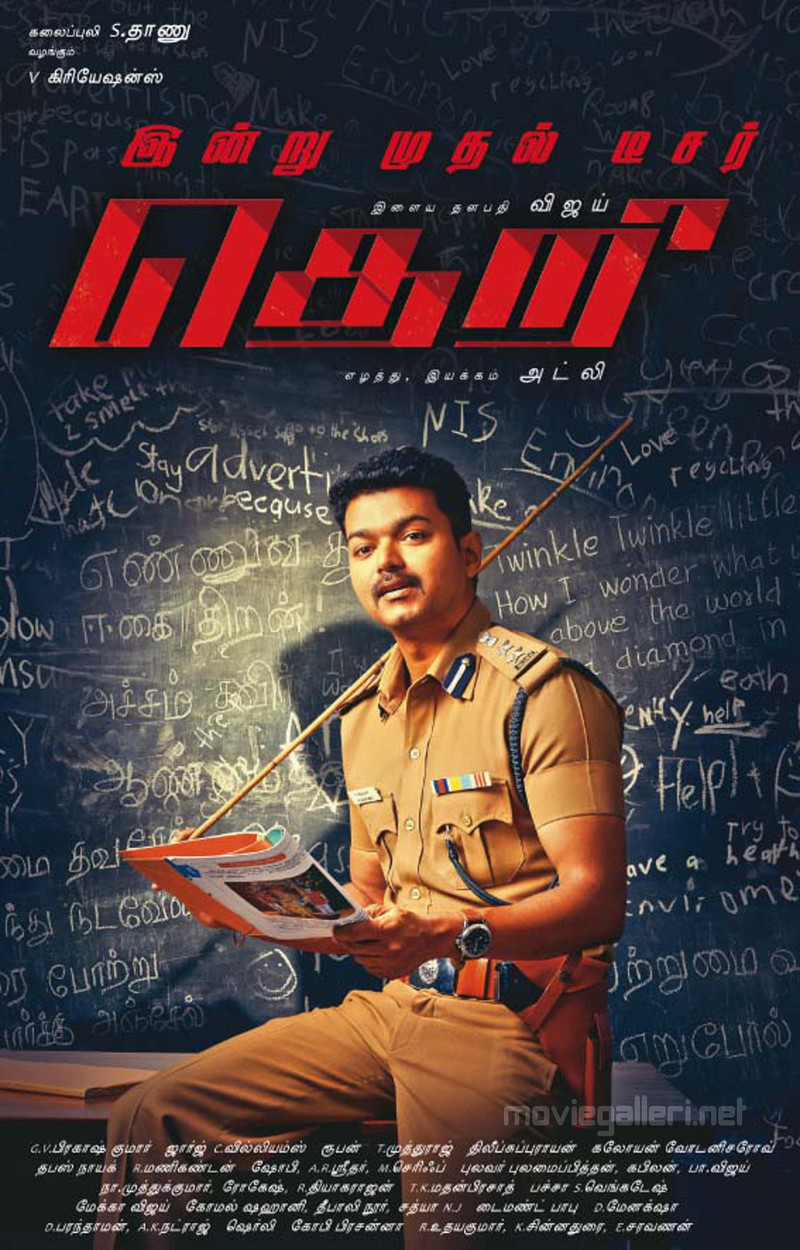 After the disaster PULI, Ilayathalapathy Vijay has gone back to his old style of acting in commercial films, which he gave to good effect in Thuppakki and Kaththi in recent times. Everyone’s hope was that this one does not bite the dust, even though it is in complete contrast to director Atlee’s (a Vijay fan) usual style, who had a superb beginning in the form of Raja Rani. The real question is, will he be able to handle a big star like Vijay?

Theri, to people’s shock, didn’t release in more than 4 theatres in Chennai, owing to the high price quoted by Kalaipuli Dhanu (producer of the film). However, it got compensated by getting a record 104 shows at spicinemas for Day 1, the highest by any actor, beating the likes of Superstar Rajnikanth and Thala Ajith Kumar handsomely. That shows that there was considerable hype for this film.

Did Theri justify its hype, though?

The answer would be yes. The story is very simple, as far as commercial films go. Joseph Kuruvila (Vijay) is living his life with a bakery and a beautiful kid Nivi (Nainika, Actress Meena’s daughter), along with his sidekick Rajendran. They encounter a school teacher (Amy Jackson), and she gets a shock when she knows Joseph’s true nature.

Flashback begins, Joseph was Vijayakumar IPS, helping the needy and eradicating crimes. He has a wife Mithra (Samantha) and a mom (Radhika Sarathkumar) with whom he happily lives, not without twists (almost killed before their marriage was accepted). Nivi is born to them. Samantha gets killed by Mahendran (main villain) brutally and Vijay somehow escapes with Nivi.

People think he is dead, but he isn’t. Commercial style, right?

What does Vijay do? You guessed it, didn’t you? Take revenge on Mahendran and his sidekicks and save Nivi and himself.

Positives: Atlee’s direction and screenplay; he has come good with his first attempt in action genre, making it crisp for the audience so as to not get them bored. Vijay and Samantha’s acting was good. Nainika was cute in her expressions and many could relate her to Anikha (from Yennai Arindhaal). Motta Rajendran was good. GV Prakash’s BGMs were superb. Cinematography from George C. Williams deserve applause.

Negatives: Some dull moments in the first half, in the name of comedy. Songs were unnecessary. Amy Jackson has less scope, she could have been utilised more. Second half was predictable.

Past classics were present in this, some part from some police movies, but as commercial directors just recycle past movies to suit modern day, that shouldn’t be considered as a negative.

Verdict: Theri is a good comeback movie for Vijay, and 2 out of 2 for Director Atlee, who makes it count. Worth watching in theatres only once, due to its predictable nature.