On a quest to bring to light the archaeological mysteries of ancient India, we dive into the heart of Tiruchirapalli, Tamil Nadu, wherein stands the 2000-year-old Panchavarnaswamy temple. The temple and its exquisite carvings find mention in the ancient Tamil text, ‘Thevaram’. Resting on one of the walls of its dark corners is a carving of a man riding a bicycle. Interestingly, the bicycle is believed to have been invented in Europe only 200 years ago! 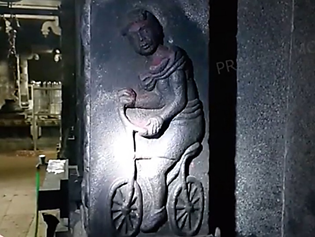 A possible explanation offered by archaeologists is that the carving could have been added to the infrastructure during the temple’s renovation in the 1920s. While this seems plausible, upon scrutinizing this statement, it just doesn't add up. The carving projects outward from the plane of the wall. If it was a later addition, the sculptors would’ve been forced to level the entire wall to achieve the desired 3-D effect of the carving. This would have resulted in a massive reconstruction in the temple. However, no such event has been recorded in the temple archives despite a remarkably detailed account going back to more than a millennium. Hence, we revert to the conclusion that the carving has indeed been on the wall of the temple for thousands of years. Fascinating, isn't it? 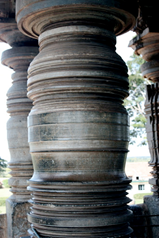 Heading on to the Hoysaleswara temple in Halebeedu, things get even stranger!

If we look closely at the first picture, circular lines are observed on the pillars of the temple. These lines can only be accomplished by machining the pillars on a lathe. These intricate effects are impossible to replicate with a hammer and chisel. While archaeologists agree that these grand, striking pillars were crafted using lathes, they have no convincing explanation for that kind of innovation 900 years ago! Etching intricate, ornate designs on hard stone pillars would be an incredible feat!

As engineering students, we are quite familiar with the working of the lathe technology. Today, working a lathe on a small metal or wood part is quite tricky and challenging. The complexity that a 12-foot stone would have posed is unimaginable, even at the forefront of technology! How these magnificent pillars were fashioned almost a thousand years ago remains a perplexing question. 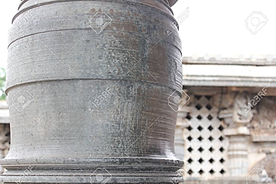 Furthermore, on the outer walls of the temple is an elegant sculpting of a man looking through a telescope. He has one eye closed, as he squints the other eye. The modern telescope was invented only about 400 years ago, by Hans Lippershey, leaving the telescope in the 900-year-old sculpture, a big question mark. 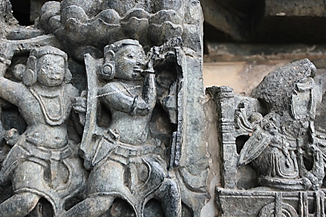 Next, let's peer into the Ramappa temple in Mulugu, Telengana. The temple dates back to almost a thousand years. The statues are strikingly beautiful and the images linger in your mind. The structures are made from black basalt, a very hard type of rock. The statues have been brilliantly polished. Hence, the surface becomes so reflective that it creates contrasting bright and dark regions called ‘highlights’ and ‘shadows’ respectively. The effect can be created on stone only with an extraordinary amount of polishing attainable by machines alone. This is similar to the highlighting effect seen in photography, which employs the use of light and various lens angles. 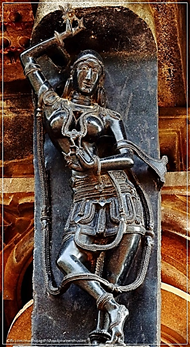 Our quest finally brings us to the breathtaking Kailasa temple in Ellora. You've guessed it! The trend continues, things get even more fascinating and strange. This temple complex is the world’s only cut-out monolith; it is truly an architectural masterpiece! The temple was made from a single mountain, by scooping chunks of rock from the top. The entire mountain is hence carved to create the structure. This is contrary to the traditional approach of adding blocks and carving individual stones. No other structure in the world has been created in such a fashion, making this complex one of a kind.

Due to the widespread nature of the temple, archaeologists estimate that a minimum of 4,00,000 tons of mountain rock would have been removed. This would have taken over centuries of human labour. However, historians can find no record of such a colossal task and believe that the entire complex was built in just 18 years.

Mathematically, assuming that the sculptors worked continuously for 18 years, not pausing for a single day - despite festivals, wars, rain, an estimated 22,222 tons of rock has to be removed a year. That implies, 60 tons of rock per day and a staggering 5 tons of rock per hour. It is important to note that this takes into account only the removal of rock. It doesn’t include creating the sophisticated, sensational statues and carvings.  It is barely possible to remove 5 tons of rock per hour today, with advanced machines at our disposal, making it a herculean task to achieve with chisels and hammers, rendering this theory obsolete. 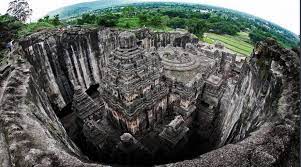 Were these phenomenal, beautiful, and elaborate statues truly made with primitive tools? The mysteries of ancient India reveal remnants of something bigger, hinting at the possibility of an advanced ancient civilization, that created majestic marvels on stone - Ones that we can’t fathom replicating today, at the presumed pinnacle of modern technology!