The excitement around college was palpable as the Chennai police and the people in Anna University prepared to welcome the Vice President of India, M. Venkaiah Naidu. Our college hosted the inauguration of a photo exhibition along with the launch of a new initiative "New India- We Resolve to Make" and the commemoration of the Quit India Movement’s (QIM) Platinum Jubilee.  After the inauguration of the photo exhibition, an unusual silence was held, as the Vice President of India made his way onto the Vivekananda Auditorium stage, accompanied by the governor of Tamil Nadu, Ch. VidyasagarRao, the Minister of Higher Education in TN, K.P. Anbalagan, Minister of Fisheries, D. Jayakumar and Ananth Kumar, Minister of Parliamentary Affairs. 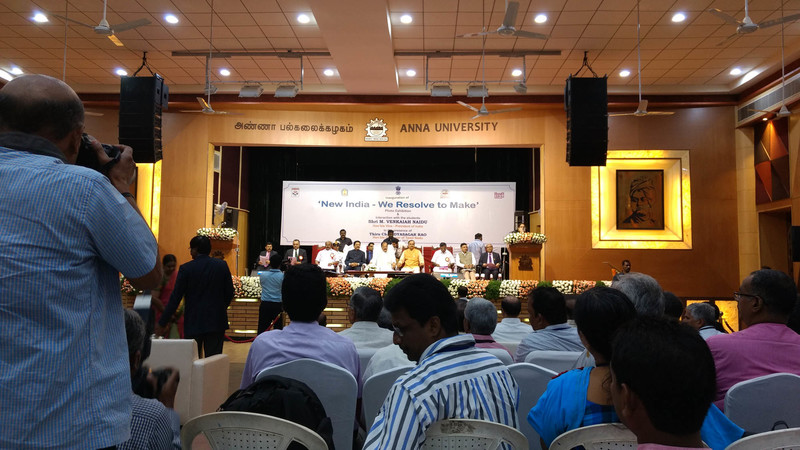 The welcome address was delivered crisply by K. P. Anbalagan. He spoke on prospective job opportunities and education in Tamil Nadu, and the academic accomplishments of Anna University. He described the New Vice President to be a very strong and humble leader.

Ananth Kumar, the Minister of Parliamentary Affairs, expressed his views on how India had changed since Independence and how important it is to maintain democracy in its purest form. He said that the Vice President inaugurating the exhibition during the 70th year of Independence and the 75th year of Quit India Movement was a moment of real pride. He applauded the Vice President’s efforts in building proper roads across India to connect more than 5 lakh villages and cities across the entire country.

Finally, the man of the hour, stood behind the mike. He began with a humble apology for his inability to speak in such a great language as Tamil. He recalled the sacrifices made by our freedom fighters and said,"With freedomcomes great responsibility". Throughout his speech, he kept stressing on how Indians should, at any cost, stand united. He expressed his grievance on the recent violence that took place in some regions of India. He quoted Gandhi saying that India’s democracy started with non-violence and equal freedom for all, and hence our differences over religions should be reduced slowly. “If we can inherit property and land from our ancestors, why not inherit the rage, fury and commitment they had when Mahatma gave his 'Do or Die' call?” he asked. The auditorium was filled with vibes from the yesteryear battlefields. We were teleported back in time when Indians were motivated by the great leaders. While talking about the women of India, he said something that got everyone thinking. He said," In the ancient times, Saraswathi Devi was the educational minister, Durga Devi was the defense minister and Lakshmi Devi was the Finance minister. Why do we hesitate in giving women posts in the government, these days, when we still worship those goddesses?”He then said that the parliament was only to debate, discuss and decide, and not to disrupt in any form.

After a while, the interactive session between the Vice President and the students commenced. A random set of 5-8 questions were asked. Some intriguing questions included combining the educational syllabus throughout the country and the allocation of budget for research. But the question on whether inflation might occur in the future as a result of the '20 million jobs by 2020' scheme, stood out amongst them all. He answered that raising the standards of our economy is the need right now. Once we look after that, inflation will be taken care of. The evening ended perfectly with the purest form of Indian culture, which was put up by an expert drama group.

Personally we found a gem of a leader in him. We felt like he was born to inspire and create change. And that is a culmination of how the Vice President's first visit to TN since his oath went about.