There are those who consider smiling as a form of charity. When such a simple facial expression can be considered as charity, imagine what wonders an actual donation can play in anyone’s life.

Well, with a motto, "Gift a smile," that pretty much sums up what Siruthuligal Charity Club of CEG stands for.

Aim of the club:

The aim of Siruthuligal Charity Club of CEG is to bring a big change in the lives of those deserving students of this esteemed institution of College of Engineering, Guindy (CEG) who have a vision, who have a dream to be fulfilled in their life but are unable to accomplish it due to financial constraints.

One cannot blame those students for such a constraint right? Not being idle spectators, we need to come forward and help them in whatever way we can, so that those who are close to us can realize their dreams in life too.

That being the case, the members of the Siruthuligal Club of CEG play an important role in their lives. It was started by a constellation of seven students in the year 2011 with the consent of Anna University’s former Vice Chancellor Dr. Mannar Jawahar and under the guidance of CEG’s former Dean Dr. M. Sekar.

Vision of the club:

"Where there is charity and wisdom, there is neither fear nor ignorance.

Achievements of the Club:

Since its initiation, the club has so far helped more than a hundred CEGians pay their college tuition fees, hostel or exam fees amounting a total of more than a million INR.

As the biblical saying goes “But when thou doesnt alms, let not thy left hand know what thy right hand doeth”

It means that charity should be done in secret.

The aim of this club is not to gain reputation by offering these kind of services by doing it publicly but to trigger that innate human nature which is lying latent in each one of us.

This year the valedictory function of this prestigious club was held on the 18th of April at 4:30 pm and it was presided by our revered Dean  Dr.P.Narayanaswamy and Mr.K.Praveen Assistant Professor, Department of Electronics and Communication Engineering as the Chief Guest at the venue Tequip Hall, Main Building.

At the valedictory function, the office bearers of Siruthuligal Club of CEG for the academic year 2016-17 were designated from various departments based on their genial nature, enthusiasm in helping the students and commitment towards the noble cause.

After greeting the audience and the faculty advisor, our revered Dean highlighted the various measures taken by Siruthuligal Charity Club of CEG to help the many CEGians in realizing their dreams by offering a plethora of financial aids to the deserving candidates.

The Dean also applauded the former office bearers for their priceless efforts taken to fulfill the needs of the students in the past year.

An annual report was delivered by Ms.P.Dhivya. She highlighted the illustrious achievements of the club in the past year and gave a glimpse of the progress made by the club.

Progress of the Club: 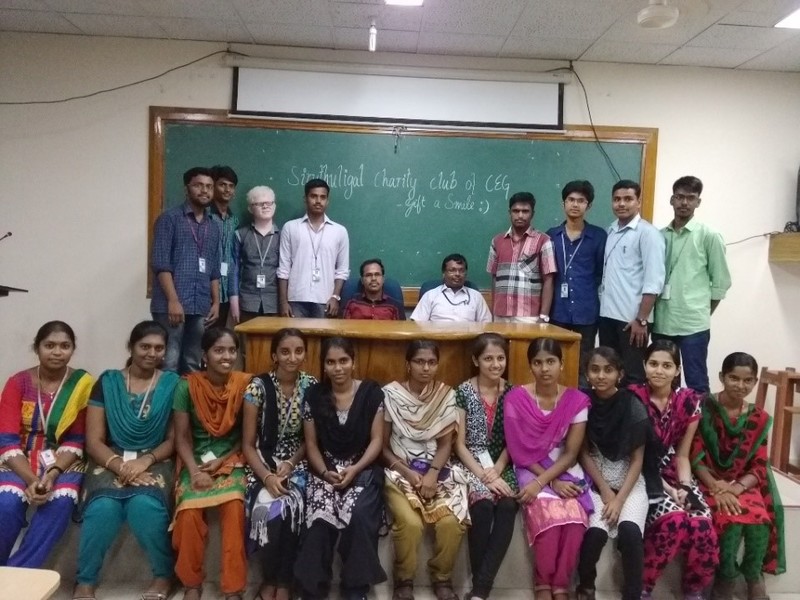 Following the annual report, the office bearers of the renowned Siruthuligal Charity Club of CEG for the academic year 2016-2017 were appointed by our respected Dean.

As the axiom goes “People may change.  Things may come and go but life goes on.”

With the hovering end of the college journey for yet another batch of students, finally the time had come to pass on the baton to the new set of office bearers with the confidence and hope of attaining greater heights in the years to come.

Anitha S was appointed as the president of this club for the upcoming year.

The student advisor of the club presented a special address. He commended the former office bearers and expressed his wishes for the club in their endeavour.

The fervent volunteers of Siruthuligal club of CEG were remunerated for their hard work with certificates and prizes.

One of the club members expressed the agenda of the club. In the years to come they are looking forward to

It was followed by a inspirational talk by the co-founder of the club Mr. Madhan (CEG alumnus, Dept. of ECE).

In his speech, he highlighted the whole hearted contribution by the donors towards this venture. His talk emphasized the value of philanthropy and the joy of giving and sharing.

The following proverb best suited the point he stressed upon in his speech.

These valuable recommendations and motivating thoughts struck a chord in the minds of the students who were present on the occasion.

He also brought to our notice the fact that many bright students in our state are unable to accomplish what they deserve due to lack of financial aids and also appealed to the members and volunteers of the clubs to expand their reach not only to the students of CEG, but also to many other students who come from every nook and corner of our state who need a hand to lift them up.

The valedictory function came to an end with the Vote of Thanks delivered by Mr.D.N.Nabinesh which left an ineffaceable colophon on the minds of the audience present. This brought an end to what had been an exciting year for the Siruthuligal Club of CEG.