When we talk about architectural wonders, the first cities that come to our mind are popular tourist locations like Paris and London. But one can behold an array of breathtaking architectural works in our own country, and this is best seen in the various temple structures scattered all over India. However, of the thousands of temples, let's focus on one temple in Tamil Nadu. Buckle up, for a tour of the Great Living Chola Temples. The temple complex is situated at Darasuram, a panchayat town near the main city of Kumbakonam. Declared a UNESCO world heritage site, the Airavatesvarar temple was built by Raja RajaChola II in the 12th century.

The Airavatesvarar Temple is best known for its ornate works which are spread all over the site. The temple is a repository of micro-carvings and sculptures that leave us spellbound that one day would simply not suffice to appreciate all its intricacies.

As we enter the temple through the main entrance, we are probably disheartened looking at the East Gopuram in ruins but are soon engulfed by the Mandi Mandapam and the Chariot-shaped granite steps that lead us to the Rajagambira-Thiru-Mandapam. The Rajagambira-Thiru-Mandapam is one of the four mandapams of the temple. The one following is the Rajagambira Mandapam which is known for the various Yali sculptures with curved trunks and tails. Adjoining it is the Mookahmandapam, characterized by its intricately carved pillars with depictions from the Puranas. The fourth is the Arthamandapam which has stark differences from the rest with its plain pillars. As we circumambulate the temple we can feast our eyes upon various sculptures, carvings, and bas-relief. Every sculpture, every shrine makes us halt our steps and gawk at the innate works. 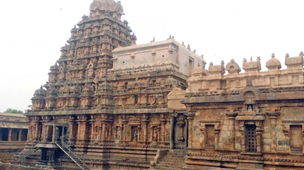 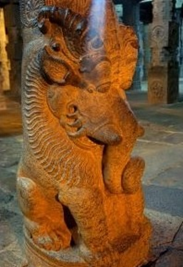 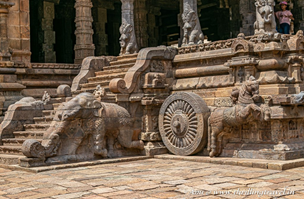 To look into a few of the sculptures, let’s turn our attention to the statue of Kannapar in the Mookahmandapam. He can be seen with his hands folded in prayer but as we look down towards his feet, we can see that he is wearing footwear. The footwear can be clearly seen with straps that are carefully cut. Throughout the Mookahmandapam, we can see beautiful carvings of dancers, musicians, artists which for a moment transport us back to the Chola era. The other notable ones are the idols of Ganga, Saraswathi, and the singing steps of the Bali peeda. The temple is also adorned with miniature panels that contain inscriptions portraying the stories of the 63 Nayanars and some panels depicting scenes from daily lives. 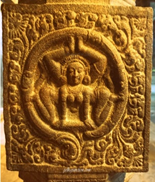 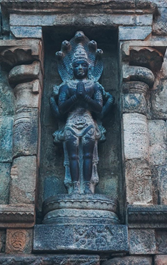 Every niche of the Airateesvarar Temple is filled with mind-blowing intricate carvings and sculptures. As we walk around, we can see statues of the various deities in a perpetual trance with ever-glowing faces and smiles clearly visible though the temple is old. The Airavatesvarar Temple encompasses elegance and craftsmanship and will remain as one of the greatest works of architecture. 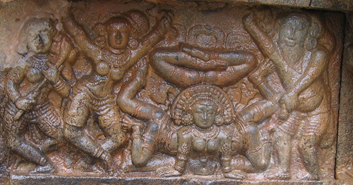 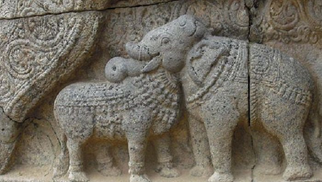 As we come to the end of our tour, I hope that you were fascinated by the architecture and that it has intrigued enough for you to take a tour on your own, or to look into these marvelous works for yourself and explore them first hand.