The annual general meeting of the Alumni Association of College of Engineering Guindy (AACEG) for the year 2014 – 15 took place at the Alumni Centre on 19th September, 2015. The meeting was presided over by Er. Karunakaran, President – AACEG. “Alumni Association is always for the present students, while also taking care of the welfare of the alumni”, said Er. Karunakaran, while welcoming the gathering and delivering the keynote address.

The various activities and events conducted by AACEG in due course of the academic year 2014 – 15 were highlighted. They include:

Er. Karunakaran also thanked Er. A J Balasubramanian and Er. Vish Vishwanath for organizing CEGAM 2.0 in a grand fashion, Er. Suryanarayanan for taking care of the memorial lectures, Er. Ramaseshan for bringing out the career guidance programme, which was attended by 532 students, Dr. K P Subramanian for spearheading Pon Maalai Pozhudhu, Er. Vasudevan for leading the proceedings of the Blood Donation Programme, Er. Krishnaswamy for being in-charge of the newsletters, Er. K Swaminathan for seeing through the documentation process, Dr. Hariharan, Treasurer, who also took additional burdens of hospitality and logistic divisions during each and every meeting, Er. Shanmugam, the office administration co-ordinator, Mr. S K Prabhakaran, Secretary, who took the efforts towards EGM held on 28th February, 2015.

When Er. Karunakaran mentioned that the plea of establishing an Incubation Centre for helping out the innovative ideas of CEG students financially had been approved by the Dean Dr. P. Narayanaswamy, the hall erupted with applause. He also noted that a separate venue for the centre had been allotted at the Northern side of the CPDE. 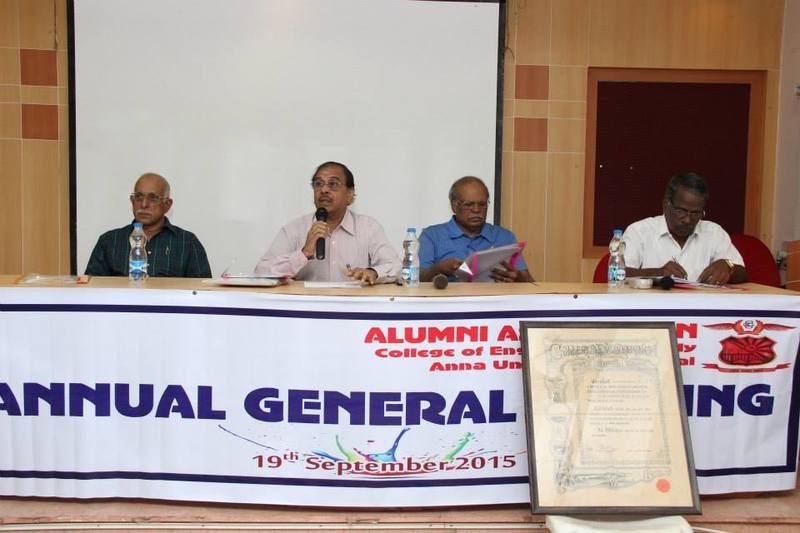 This was followed by the presentation of the annual report, which reported that a total of 33 lakh rupees had been received – 25 lakhs from the members and 8 lakhs from donation via endowments, while the expenses stood at INR 14 lakhs. The report also proudly pointed out that the strength of the association stood at 2547 enrolled members with an additional 38 donor members. The setting up of some regional chapters of the alumni association like CEGAANA for North America and CEGAAB in Bengaluru were announced. The activities and targets for 2015 – 16 were briefed. They included incorporating E – Polling during the elections for the posts of AACEG, construction of a new auditorium worth Rs. 45 crore from the alumni fund and Anti Rabies Vaccination for the stray dogs within the campus on 26th September in association with Blue Cross.

Approval was sought from the members on the audit statements and the need to felicitate the 7 UPSC toppers from CEG including Ms. Charusree Thiyagarajan, who secured a national rank of 6 and came out as the state topper of Tamil Nadu was insisted. All the members who were present and who had worked towards the development of AACEG were thanked and appreciated. The meet ended with dinner for all the people.