“Any technical progress involves three elements: knowledge, energy and materials”- George Paget Thomson, English physicist and Nobel laureate. Sync ’16 was a perfect example of the same, with the talents and efforts of the students in full glory.

Sync ’16, an intra-college symposium hosted by the Department of Computer Science of CEG, was held on 3rd October 2016. The event was chaired by the Computer Science and Engineering Association (CSEA) to kindle, hone and to showcase the intellect and talent of the budding Computer Science engineers. 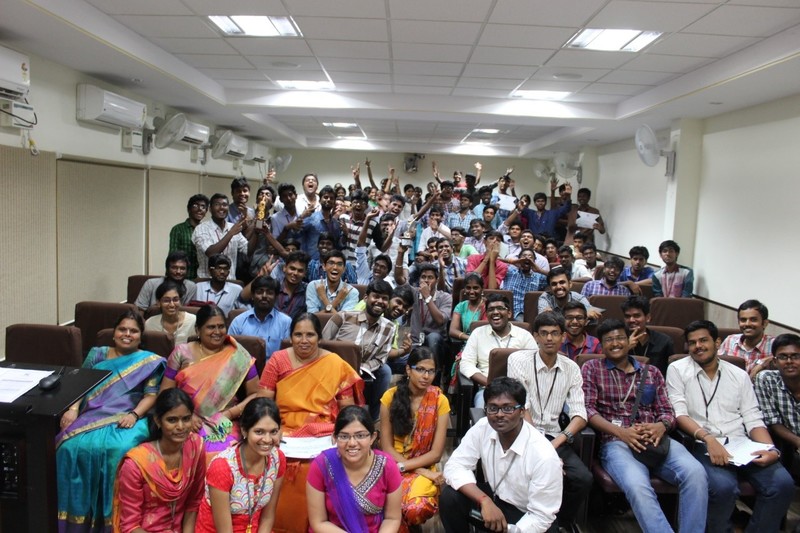 As is the case every year, the symposium comprised of a mixture of technical and non-technical events, ranging from a brain-racking debugging competition to a creative Rebuzz event. An online programming contest was held on 1st October (Saturday) from 9 to 11.30 pm. The event saw widespread participation from students of other departments as well!

The event was formally inaugurated by the CEG Dean Dr P. Narayanaswamy and Dr Manjula, the CSE Department Head, at the Turing Hall, Department of Computer Science. The other dignitaries present included Dr P. Shanthi – the CSEA President, and Dr. Rajeswari Sridhar, the CSEA Treasurer. The CSEA office bearers were also present.

Dr P. Shanthi delivered the welcome address to the large and vibrant crowd present and introduced the incumbent office bearers of CSEA. The Chairman of CSEA, T. Giritharan then presented the inaugural address where he proposed the work plan for the year 2016-2017.

The detailed work plan focused strongly on the following points:

This was followed by the CSEA website launch by the Dean. He extended his best wishes to student participants and the department for present and future endeavors. Dr P. Manjula then addressed the gathering and elaborated on the future plans of the department and the collaboration of the department with foreign universities to further promote the exchange of ideas and facilities.

Former CSE Department Head and Senior Professor Dr T. V. Geetha urged the students to participate in various department activities. She quoted musician Rob Thomas, saying, “You cannot fail without your consent. You cannot succeed without your participation”. She also stressed on the importance of participation.

The function concluded with the vote of thanks presented by the CSEA Student Secretary Aadalarasan P.

The events in Sync ’16 were well received with students rushing up and down the department as they tried their hand in a variety of events, right from the get go. This year saw the introduction of a novel event, ‘Textathon’ where students were tested on their texting speed. An online selfie contest, ’SyncUrSmile’ was conducted where prizes were awarded for ‘crazy’ selfies and groupfies.

The winners were felicitated with cash prizes and certificates during the award ceremony. There were also many batch awards, including those for active participation, and a cricket tournament.