“Who am I, a mere Prime Minister, before a Queen, a Queen of Music?”

These are the words of our former Prime Minister, Pandit Jawaharlal Nehru, about the ‘Nightingale of India’, M.S. Subbulakshmi. As a part of celebrating her 100th birth anniversary, “A Tribute to M.S.Subbulakshmi”, a Carnatic concert was organised by Saptham, the official classical dance and Carnatic music club of CEG, with the support of the Alumni Association of CEG (AACEG) at the Alumni Hall on 30th Sept, 2016.

The programme was headed by Dr. P. Narayanswamy, Dean, CEG, along with the Student Advisors and the Office Bearers of AACEG. The Mambalam Sisters, Smt. Vijayalakshmi and Smt. Chitra, graced the occasion with their presence. 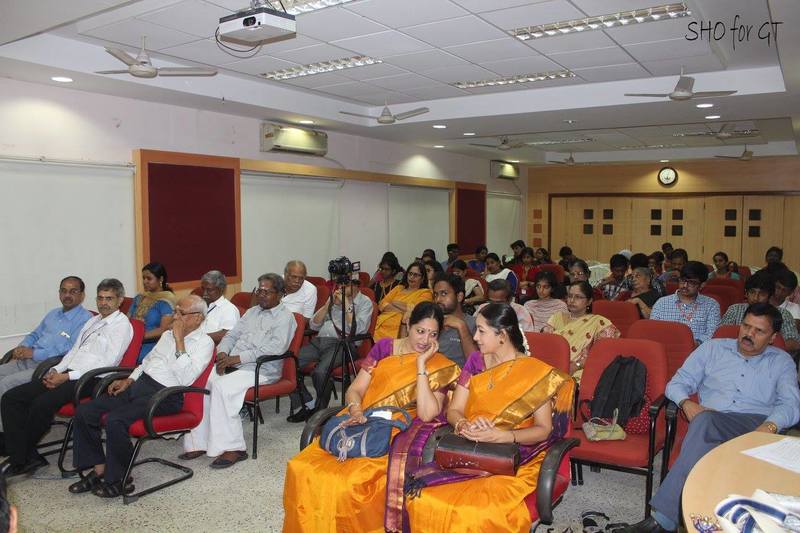 Reshma, Coordinating Head, delivered the welcome address, outlining the agenda of the event. Rajasekar (third year) introduced the guests of the day and initiated the event.

The concert commenced with the Sriraga Varnam, “Sami Ninne”, in Adi Tala which was rendered in two tempi, leading to a rollicking start. The chittai swarams added to the charanam line ‘Kamakoti Sundhara’ were attractive and uplifting. Inspired by the thunderous applause from an auditorium packed to full capacity, the concert switched to Ganesha Pancharatnam by Adi Sankarar, invocating the Elephant God, whose rendition of the ragamalika flowed in a quick succession.

Next, Shreya, a Final year IT student, took to the stage with Syama Sastri’s ‘Sarojadala Netri’. She was euphonic in her rendition of the Sankarabharanam, which was the main raga of the evening. Spell-binding phrases that radiated the multiple facets of the raga issued forth as her impeccable shruthi and laya carried the day with the listeners. Soon followed Tygaraja’s Sadhichene in Arabhi, a Pancharatna Kirthana by Pooja, highlighting the line ‘Samayanike Tagumatalaadene’ revealing Kirtana’s intent to reflect on Srirama’s benevolence to his bhakthas.

Up next was Muthuswamy Dikshitar’s ‘Parandhamavathi Jayathi’ in Ragam Dharmavathi by Poojitha. After a crisp alapana, she performed the krithi, portraying the intrinsic shades of the raga, with the percussionist Hariharan (Mridangam) effectively adding to the music with a grand thani avarthanam in Rupaka Talam.

The concert then shifted to Thygaraja’s ‘Siva Siva Sive Ena Radha’ in Panthuvarali, performed by Nandhitha, who brought forth the poignant picture of the raga through her crests and troughs. After Thygaraja’s ‘Telisi Rama’ kriti, Rajasekar took to the stage, regaling the audience with anecdotes of M.S. Subbulakshmi through her immortalisation of many songs in the field of Carnatic music- “When a popular song and the melodic raga combine the outcome is anybody’s guess”. 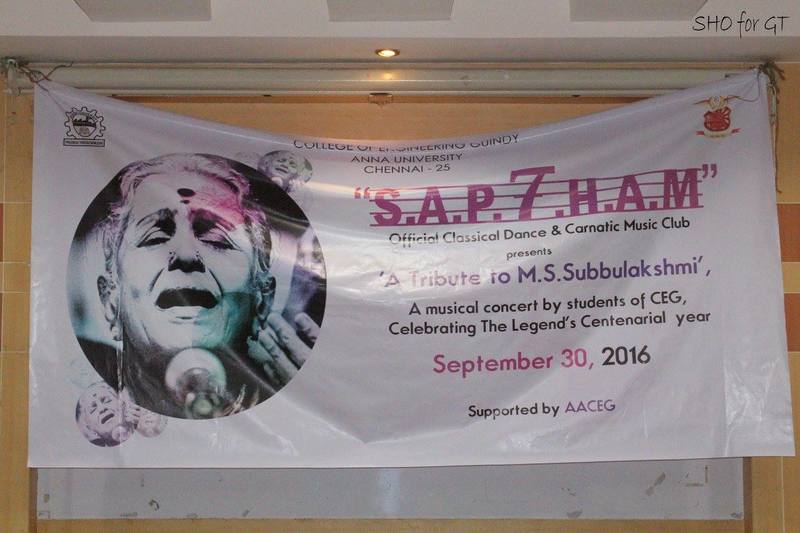 The event remembered the legacy of MS Amma, who had immortalised the Sivaranjani Raga, through Rajaji’s ‘Kurai ondrum illai’, a poignant and soulful number. This was followed by Adi Sankarar’s ‘Bhaja Govindham’, and Annamacharya’s ‘Brahmam okate’ in Bowli Raga, a superlative performance in a remarkably rapid tempo. The next two renditions, ‘Sri Chakra Raja Simhasaneshwari’ and ‘Jagadhodharana’, melodic compositions created a meditative mood enthralling listeners with its bhava. The concert concluded with Panduranga Bhajan, Thillana, and the auspicious Mangalam ‘Bhagyada Lakshmi baramma’ in Sri Ragam.

Mementos were given to Chief Guests and participants as a token of appreciation, following which the Dean and President of AACEG shared their experience in this musical sojourn. The Chief Guests then addressed the gathering, interspersing their remarks with interesting anecdotes about their association with M.S. Amma, closing with their signature number ‘Mannu Pugazh Kosai’, delivered in their rich and full style.

Thus did an enjoyable evening come to an end, and much is to be said for Saptham’s upkeep of classical Carnatic traditions, and events such as these will inculcate a love of music in the hearts of students who may not otherwise be exposed to such wonderful performances.