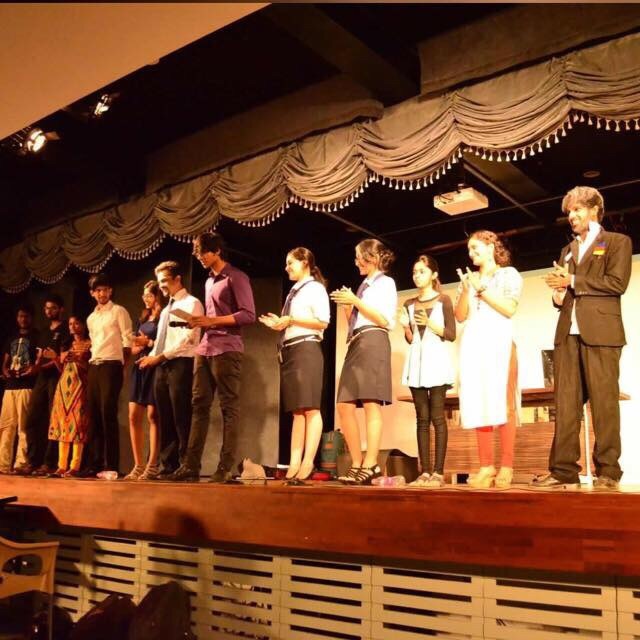 If you were one among those who didn't get to watch the play "flooded" performed by theatron because of upcoming assessments, lab models and projects trust me that curse (or probably regret) will haunt you for quite a while.
If two hours of your time could change your scores then we all should have been toppers by now. Don't you think?
Assessments come. Assessments go. But you do not miss out on a good show.

1. If you were the one who felt "Pfft! 200/- for a damn play??" I would like to see your 'saved precious little cash amount'. They say best things in life are for free, but sometimes  fun filled moments tag a price along with them.
Bearing a very simple storyline entwined with perfectly timed jokes made the play worth the pay. A complete laugh riot from the start to the end.  Not choosing the serious route, theatron treated us with some hilarious refreshing moments.

Not choosing the serious route, theatron treated us with some hilarious refreshing moments.

2. The minute you know your audience it becomes a hard game to not share glances often. This  was proved otherwise on stage of flooded. The characters made us believe we were all  part of the scenario through their anxieties, word play and enthusiasm or would I rather say professionalism. A clean sketch with on point selection of the cast was an added advantage for the crew.

A clean sketch with on point selection of the cast was an added advantage for the crew.

3. Minimalistic approach would best define the play. The entire focus was thrown on the characters rather than adorning the stage with irrelevant accessories. Be it the aeropoer workers, CBI officials, the "celebrity" daughter or be it the dictator himself, the costumes were all neatly designed featuring them the best.

...the costumes were all neatly designed featuring them the best.

4. Point to be noted: Flooded had a 'solid storyline'. Oh yes, it had a script. It needed no vfx effects or fancy trailers to advertise for the content. If you are hoping to get a glimpse of the story somewhere throughout the article, No.
I'm not revealing  for those who weren't lucky enough to be there. But for those who did make it to play, cheers! We managed to enjoy the show without any upbeat songs or a bucket of masala popcorn.

We managed to enjoy the show without any upbeat songs or a bucket of masala popcorn.

Contrary to opinions of a few, I'd gladly score it a 4.5/5.
Because, the best is always yet to come.