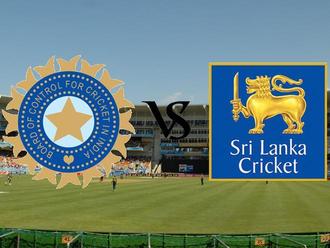 Sanga, in his farewell speech, congratulated Angelo Mathews on having a good team and shouldered the responsibilities on the latter to take the team forward.

Mathews, ironically is now in a recovery phase after the traumatizing 278-run defeat at the P Sara Oval. They succumbed to Ashwin, gave away moments where they should have won, and subsequently, lost the game. Kusal Perera, as per reports, will take Sanga’s place in the final test at SSC in Colombo. The main plus for Sri Lanka has been Dhammika Prasad, taking wickets with the new ball, and also Rangara Herath at Galle, but disappointed at P Sara. Chameera  and Tharindu Kaushal haven’t been bad, but need to be very good to sustain their place in the test side. Openers Karunaratne and Kaushal Silva have had nothing less of a poor series, being the main prey to Ravichandran Ashwin.  Chandimal is a bright batsman, who can take the game away from the opposition at will, just like in Galle, when he batted out of his skins to beat India.

India, on the other hand, have batting and wicket keeping issues to sort out, with Vijay,Dhawan and Saha all injured. So Kohli has no other choice to partner KL Rahul other than Cheteshwar Pujara, who had a terrible time in England and Australia. Naman Ojha, who has wicketkeeping experience at domestic level, will don the gloves on for the first time in his international career.

Interestingly, this will be the first time, if it happens, that both wicketkeepers make their test debuts in the same test, which happened long back when Saba Karim and Khaled Mashud took the field for the first time in Dhaka.

Colombo has been marred by rains and thunderstorms for the last few days, but the pitch is known to be a flat track, after assisting the seamers somewhat in the first 2 sessions, which Nuwan Pradeep and Umesh Yadav , the fast bowlers, will look to exploit.

Ashwin, if he gets 150 test wickets here, will become the third fastest bowler to take 150 wickets in test cricket.