During the semester holidays preceding camp, I was haunted every night by restless thoughts of how my NSS camp would be. I had never been to any camp before, and was always allergic to them. So, when the date neared, my whinings became louder and louder. And that day finally came. My fragile body had to carry so much luggage and I was already panting. I wondered how I was going to survive manuals (a decent term for garbage picking and weed pulling) and all that wandering in the scorching sun. So, just praying that the seven days of camp would go by in a wink of the eye, I approached the campsite gloomily. We stayed at a middle school in a village named Puliampakkam, in Kanchipuram district. I was from NSS unit three and that year, nearly seventy people attended the camp - including seniors who’d already graduated.

Every morning, we’d had to do manuals; only after two hours of which we get to fill our tummies and recharge our internal batteries to work for the rest of the day. 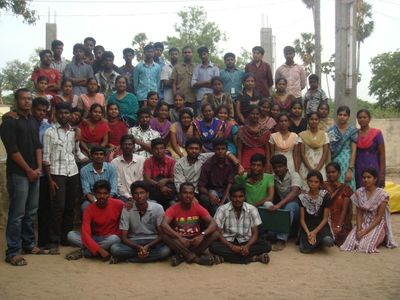 Drenched in sweat under just the 8-am sun, we’d feel lifeless. But that wasn’t the only plight. We also had to practise our street play everyday, from after lunch till dinnertime - we must have rehearsed it a million times before the actual performance in front of the whole village! However, it became a huge success . All the toddlers were gleaming with joy seeing us perform. I’ve never been so satisfied with myself in my entire life!

The play, along with the following events, had begun to giving way a sense of contentment in me, dissolving my earlier sour mood.

We conducted a computer workshop for the higher classes in school and a fire-safety  drill by the fire service department.

And then there was the surveying! It was real fun interrogating the villagers. And trust me, I’ve never met people this hospitable anywhere. They were selfless and really down-to-earth. They even offered refreshments after the survey was over!

We conducted a medical camp where we had to be equally hospitable with the villagers who were coming for treatment.  Every person seemed satisfied with the way they were diagnosed. My heart felt light. I’d previously felt lethargic about the idea of serving anyone but, after seeing their animated faces, I decided to do anything for that one genuine smile. All my unit seniors were my pillars of support all along. I finally forgot to feel the pain and sweat of all that slogging .

I never thought that I was going to feel this way at the end but, yes, I returned home with a heavy heart that camp was over already. How ironic !