Climate change is certainly the biggest menace faced by the world today. It has reached a point where it threatens all life on Earth, and it can no longer be ignored. With this in mind, the CEG Tech Forum, or CTF, which conducts the techno-management fest Kurukshetra, has laid out the theme of K!17 to be "When technology helps in combating climate change". 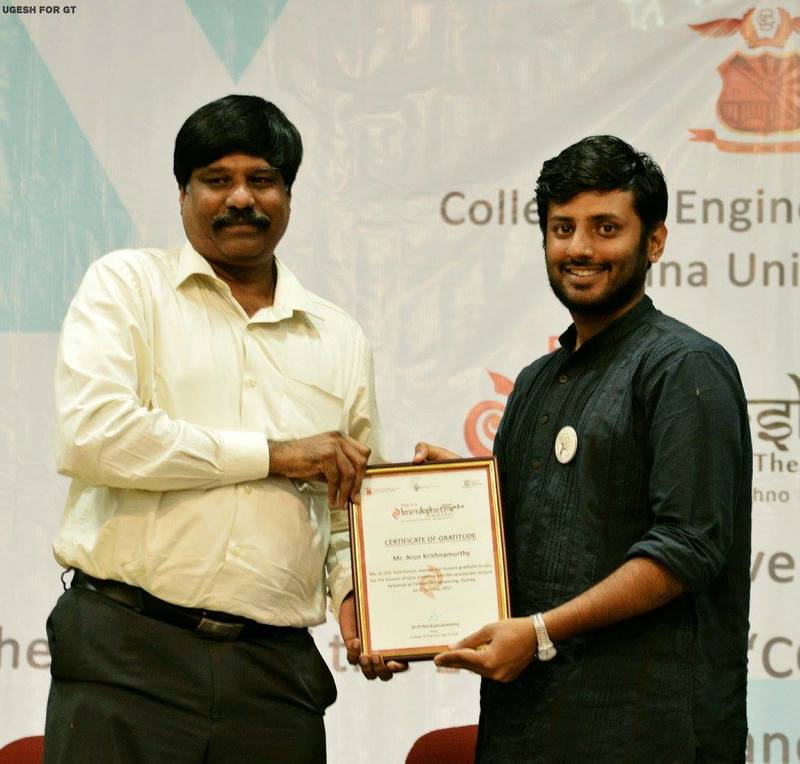 Their first move in this initiative was roping in celebrated Indian environmentalist, Arun Krishnamurthy, founder of EFI (Environmentalist Foundation of India), to address the theme reveal and ISO certification, which took place at the Tag auditorium, 5pm on 5th January.  The event commenced with the lighting of the Kuthuvilaku by the dignitaries, followed by the welcome address given by Dr Hariharan, dean-in-charge and the inaugural address by Dr Ganeshan, registrar.

Ms Tharunya, student director at CTF, revealed the highlights of Kurukshetra 2017, such as a Drone championship and the finals of the Battle of Bots- a nationwide robotics championship. She then explained about the theme of k! which would include events like E for educate, Neon Run for a cause, a campaign against food wastage in college and Project Pradeep, an initiative to provide electricity to villages.  The DIY Solar Lantern workshop will have students making their own lanterns which would then be given to the villages. In keeping with the theme, it was announced that most events will be on a  digital platform, thus minimising the usage of paper and waste production. With Kurukshetra being the first technical fest to have a virtual reality website, the audience were also given a glimpse of its unique features.

The moment following the address, when Kurukshetra was certified with ISO 9001:2015 by Mr.Shanmuga Sundaram to our Registrar Dr.Ganeshan was a moment of pride and joy for all the students working tirelessly towards the success of Kurukshetra.

The central event for the evening came when the speaker for the day, Mr. Arun Krishnamurthy, delivered an eloquent speech about his take on climate change. He emphasised how very real the threat of climate change is, how badly it is affecting people already, and about our urban arrogance. He pointed out the numerous problems faced by people, and yet how most of the people in India are apathetic towards climate change. He urged students to stop blaming others and take steps to bring about a change and said "turning points don’t happen at the flick of a finger, we need to turn". He also requested us to stop living in mediocrity, stressing that engineers must help find technological solutions to current environmental problems, like water and waste management, and energy efficient technology. He positively and confidently said that CEG can become a trend-setter if the theme is taken in the right way and worked on. His passionate speech instilled in the students a sense of responsibility towards the environment.

With concluding speeches by Dr S. Swaminathan and by Ms. Vinithra, the evening served as an assurance that the coming generation of engineers would take steps to be environmentally conscious, and that these steps were only the beginning.