Karthi starrer Komban arrives amidst great media hype generated due to protests about communal violence in certain parts of the state. The film starts off with a typical panchayat scene where two heavyweights clash off for the post of Head of the village. Those who tend to oppose the richer candidate (the main antagonist) are mercilessly killed. He eventually picks a fight with the hero and his father-in-law. Whether they are able to protect their family or not forms the rest of the plot. 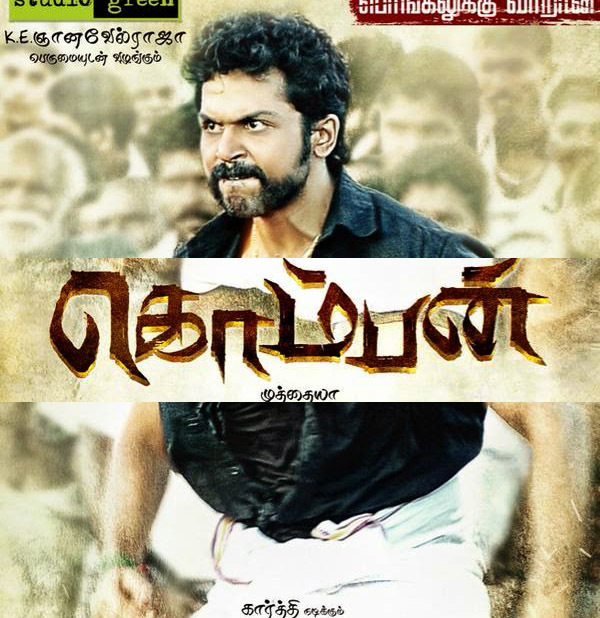 The story is easily relatable to the audience. The hero, as usual, is shown as the happy-go-lucky guy who roams at will around the village. What sets him apart from others is his vicious temper upon seeing a crime or misbehaviour. Lakshmi Menon plays Karthi's love interest as the typical village girl. The high point of the movie can be said as the role of Lakshmi Menon's father played by Rajkiran. He has executed his role with full perfection and is at ease in pulling off various emotional scenes. His bonding with Karthi forms the crux of the movie's plot. The portrayal of the understanding between a son-in-law and father-in-law is somewhat new and refreshing.

There is a horde of antagonists who are in dire need of taking revenge on Karthi, who picks a fight with almost everyone around. Hence Karthi is always on his toes, later on in the movie.

The editing is spot on with the movie running below 140 minutes. One of the biggest pros is that time flies in a jiffy, the movie never lags at any point. The cinematography is also appreciable due to the usage of a dark tone throughout the movie signifying the underlying current of violent nature of the men on screen. GV Prakash's music suits the movie's backdrop, but could have been better.

Summing up, Komban is a movie which can strike a chord with the masses, specifically the family audience.