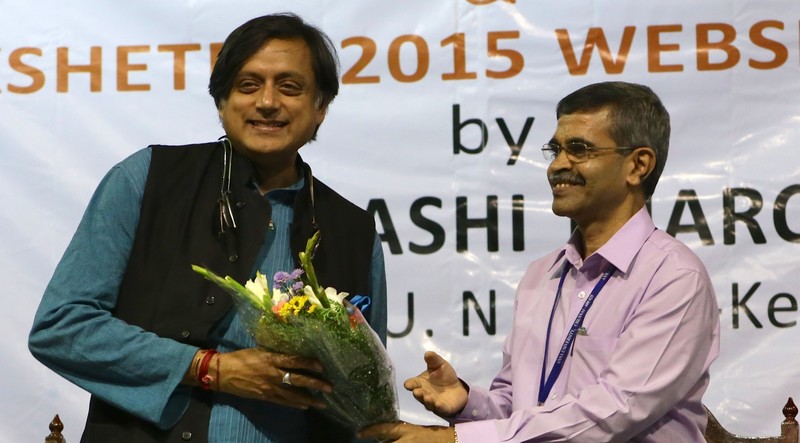 A week ago, the Kurukshetra Facebook Page had dropped some hints, that they were expecting someone special, to launch their brand new website.

Kurukshetra, CEG's annual Techno Management fest, scheduled to take place in January 2015, is one of the few events in the city under UNESCO’s patronage.

It couldn’t have been more apt for UN Peace-keeper, eminent author and MP Dr. Shashi Tharoor to launch the website.  He arrived in style, and left an indelible impression on the students with his remarkable personality. Dr. Narayanasamy, Dean of CEG, Dr. Kannan, HOD of IT Dept and Chief Coordinator of CTF, and Dr. Swaminathan, Treasurer of CTF were invited as Guests of Honour.

The day was extra- special for the members of the CTF( CEG Tech Forum), who had put in much effort in organizing this function. The promotional video of the website launch which was played to the audience and the dignitaries, left the students in awe. 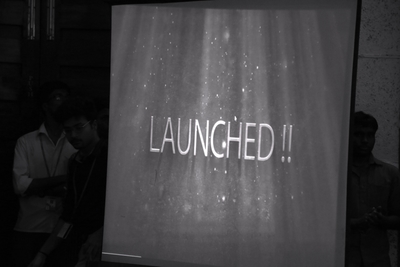 The most awaited moment arrived, when Mr. Tharoor was called to address the students.

“I did have a very busy schedule, but the minute my PA informed me of your invitation, I couldn’t have been more excited to accept! After all, you are the students of one of the oldest colleges in the country!”

Referring to us as the ‘cream of the crop’, he began his speech by appreciating how much effort we ‘engineers’ put into our studies. On the same note, he mentioned that the 21st century was the turning point for us, as students to think ‘out of the box’ and begin to ‘question the answers’. 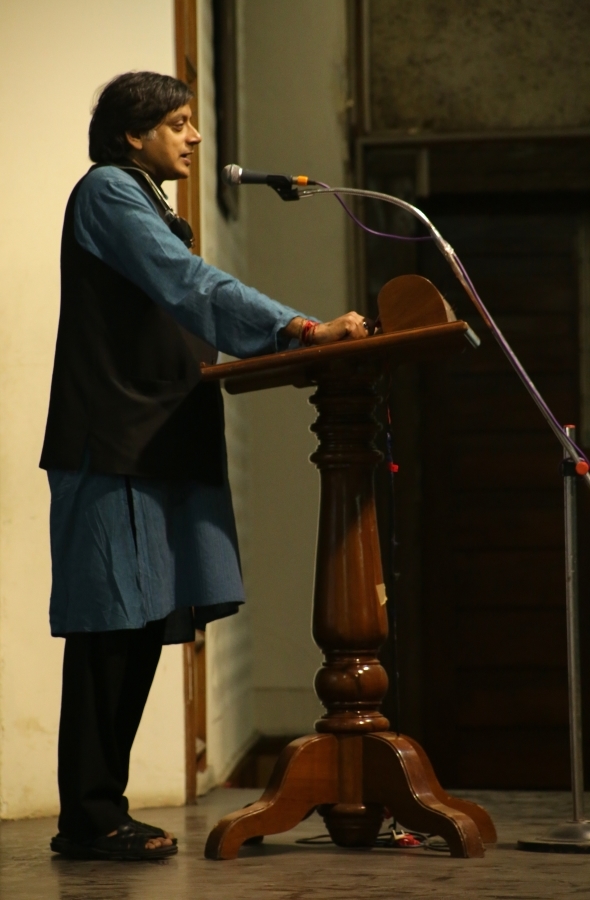 “This is not only the time to study, but to take risks, be adventurous, and equip yourself to handle what you’re not prepared for! Make sure you have a well formed mind, not just a well-filled mind!”, said Dr. Tharoor.

A few jokes, a few personal experiences, and some key statistics about our country, kept the audience on their toes.

Although he had been invited to address the students, he seemed more eager to have an interactive session, and hear our perspective. With a lot of patience and understanding, he answered the various queries put up by the students, which covered subjects like the environment, energy resources of the country, and about the role of Indian youth in shaping the future. One of our reporters, Shreya Vaidyanathan, too, asked him a few questions. Here’s an excerpt.

GT:  "When you were in college did you have a clear cut vision laid out? Or have the slightest idea of entering politics?"

Dr.ST: "Not at all! Growing up in a middle class family, education was always first priority. Moreover since I was always a front runner in studies, higher education was the natural choice for my parents. In fact my mother was against me getting involved in politics like in any other middle class households. Later on it was only when I was invited by political parties to join them, did I consider becoming a politician"

GT: "In a diverse country like India, English was perhaps a unifying factor. But, the standard of written and spoken English has fallen drastically in recent years and there is more and more undue emphasis on regional languages. Does this worry you?"

Dr.ST: "There are two sides to that, I think it's both good and bad. Firstly English was very much a uniting factor in our country and it's sad to know that the standard of English has come down. There were times when people from various parts of the nation could interact with each other in the language and there have even been instances in my home state Kerala where the candidates have given election speeches were in English and even won! One cannot imagine giving an address without speaking in Malayalam. Secondly we aim to reach progress by working with other countries, establishing relations which the global market so forth and so on, and all these are possibly only if we are well versed in English. So it's necessary for us to throw light on the importance of English. On the other hand regional languages promote a sense of unity in each region and also in states like Tamilnadu or Kerala where Hindi is not more common it's the only language which holds all the people together."

It’s not often you come across someone of his stature, who is a keen observer, listens carefully, and responds with near-perfect diction. He certainly proved to be an inspiring orator and youth icon.

Saravan Krishna, Student Director of the CTF, was very excited about the function. “We wanted to organise a guest lecture for our students as part of Kurukshetra, and the website launch was around the corner. When we received the confirmation from Dr. Tharoor, we couldn’t have been happier about him launching our website.

Our aim is to take Kurukshetra to a whole new level this year. In just a few years, we’ve managed to bring together some brilliant young minds to showcase their talent. Amidst the exciting events which take place, guest lectures like these are a wonderful opportunity for our students.

Sripradha, another Student Director says, "We couldn’t have organised this event without the support of our Dean, Dr. Narayanasamy. It felt great that the event was a success! We would love to have our juniors join us in organising more such events and pool in their ideas!”

Prashant and Aswin, members of CTF who played a key role in designing the website, tell GT that they’ve put in loads of new animations, and coding, to make the website stand out from the previous years. Sure enough, the website does look very promising.

Kudos to CTF and the K! Organizers! Looking forward to some mind-blowing events next semester!