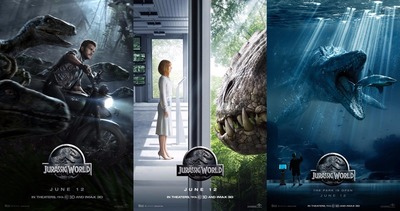 “Place your bets before the movie starts – T Rex or Indominus Rex?”

Released in Flat (35mm,not full screen size) projection in 3D, an attempt to hide the mistakes in graphics and to reduce the exorbitant cost proves alluring in terms of clarity.

A movie for the fans and highly enjoyable if you can check your brain at the door, when they hand you your 3-D glasses and pick it up on your way out. The script threw logic out the window.

It’s all in good fun, but Jurassic World doesn’t even come close to that most intimate and dearly coveted “Gosh, wow” sense-of-wonder that the original film mustered so easily. Roar more, bite less.

This movie has been toned down for all audiences, you never see any gore or dismemberment. The dinosaurs are no longer frighteningly fierce predators with killer instinct, but instead are now cute misunderstood animals with emotions. There are a few Jurassic Park references here and there. They don't have any purpose of being there except for the very slight nostalgia which the characters don't even acknowledge. It makes you wonder why they even bothered putting it in at all.

(Spielbergian Jurassic Park – 8.1) Trevorrow has made a decent attempt to imitate the former, but has his name stamped all over the movie. Nonetheless, its “fun”.

The dream of John Hammond(the old guy with the pebble having mosquito in the first part) AND that of the dino fans come true in this part – a fully functioning dinosaur theme park. After 10 years of its successful up and running state, the rate of visitors begin to decline. So, they’ve cooked up a scarier, louder, cooler dinosaur with “more teeth” to “entertain”. When the animal aka monster is cut loose, the mayhem that follows makes up the story.

A pair of kids of an about to be divorced parents are sent to their super busy aunt Claire(Bryce Dallas Howard), who seems in charge of the whole dinosaur place. The theme park seems ethereal , with toddlers riding on dinos, Mosasaurus feeding on shark, and in a later scene predating a Pteranodon with Claire’s assistant in its beak ( a copy from the Deep water death match where the whale eats the cape gannet with sardine in its mouth) and T Rex feeding on meat from a signal of red flare( an analogy to any monkey in a circus).

Mr. Simon Masrani (played by the Indian export Irrfan Khan),the billionaire owner and the true intellectual heir of John Hammond knows his dinos need to entertain the masses. So, when the visitors start seeing even the T rex like an elephant, he urges his lab to push science to its limits to create new attractions. With the base DNA sequence of a T Rex, they use DNA from a variety of species including cuttle fish, tree frog etc.. to create a stable dino entertainment purpose scarer. The Result? Highly intelligent Indominus Rex, which is nurtured in complete isolation.

Owen (Chris Pratt), the male protagonist is shown taming the Velociraptors to take orders. He is approached by Claire to ask for inspecting the enclosure of Indominus Rex. A lot of focus is shown on their relationship (which btw was a one failed date), but there is no chemistry. In the following events, the killer dino escapes and sets out to find its place in the food chain, also killing for sport. In the attempt of capturing it, without “killing”( mind you, it’s a 26 million dollar creation), Mr.Mosrani dies and the Pteranodons in the dino aviary break free, posing mortal threat to every one of the 22 thousand something visitors on the island. Meanwhile, the nephews of Claire are in the gyrosphere ride and drive into the woods, where they are attacked by the Inodominus. Eventually, they escape.

After the reunion of Owen, Claire and the kids (and yeah, Owen and Claire kiss here), Hoskins( Dennis aka havoc wreaker of this part) proposes the genius idea (sarcasm) of using Velociraptors to find and kill Indominus. But, wait, they didn’t realize raptor DNA was also used for cooking up Indominus. So bam, the raptors side with Indominus and it’s dinos vs humans.

Wait, there is still a Chekhov’s gun, Owen initially claimed to be the Alpha of the raptor gang as they imprinted on him during birth, so there is a moment where raptors choose loyalty to Owen and now it’s, humans + raptors vs Indominus.

This is not enough to kill it(yeah, they need to kill it now as Simon Mosrani is dead and the island is in a state of total disaster), so Claire uses a “clever and brave”( sarcasm again) ruse and brings T Rex into the scene. Voila, now we have humans + raptors + T Rex (+Mosasaurus) vs Indominus. Whew, right?

After the brawl, all the dinos are wounded and none are able to move. This time, Mosasaurus comes out of the sea and predates the Indominus in one gulp. It’s the calm after the storm happening then. Humans evacuate and T Rex is left standing on the island as the Alpha.

Now, to the billion dollar question: Is the film as good as Jurassic Park? No, it is not but it is a worthy successor.

Best One Liner in the movie:

“All my friends’ parents are divorced anyway” says the older kid to convince the smaller one, when contemplating his life after their parents’ divorce, which leaves me wondering about the western culture.