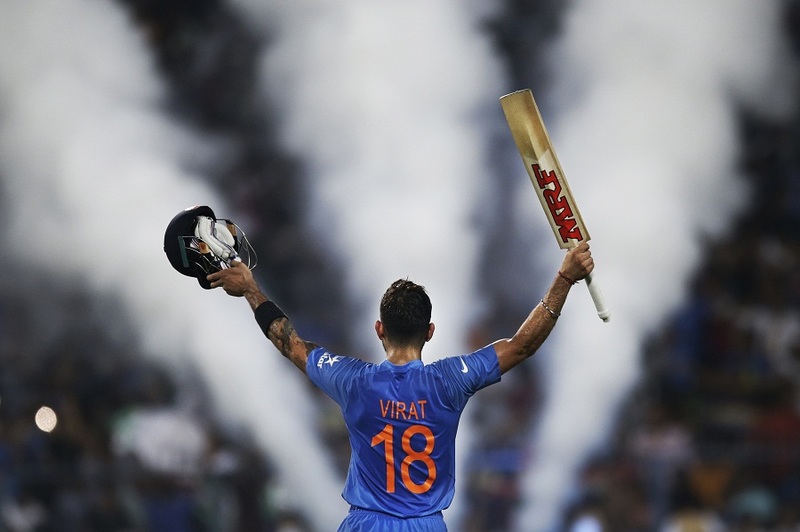 Though it was a weekend, the shopping malls, theatres and restaurants looked empty because it was the clash between the Asian cricketing giants India and Pakistan. The rain God made a short appearance and the game was reduced to 18 overs per side. The match started off with a felicitation ceremony which had the presence of Sachin, Shewag and many other dignitaries. MSD tossed up the coin and it was the Indian bowlers to do their duty first. The entire Eden Gardens roared as the players walked up for the national anthem and it was Amithah Bachan to sing for India. Ashish Nehra, the new spearhead of pace attack and Ravi Ashwin opened the bowling from both the ends. Though the ball didn't swung much Nehra with his good length and Ashwin with his sharp turn troubled the batsmen frequently. The Pakistani batsman didn't go too hard and managed only 24 runs in the batting power play. Jadeja and Raina were the next to join the party and exploited the pitch with extra bounce and turn. It was the 8th over when Hardik Pandya took a blinder off Raina to dismiss the opener. Just when Shehzad and Afridi started to go for big ones both of them mistimed a few deliveries and lost their wickets in quick succession. When everything was going in India's way Shoiab Malik and Umar Akmal showed some stroke making abilities and went after the loose ones from Bumrah. Both of them didn't last long and lost their wickets in successive overs and Pakistan managed to put up 118 runs on the board which is a below par score in Eden Gardens. 118 runs to win from 108 balls, Shikar Dhawan and Rohith Sharma opened up the batting line up. Mohammed Aamir the nightmare for Indian batsmen during Asia cup bowled with same rhythm and troubled the openers. Rohith went for a big one but managed only to mistime it and went back to the dressing room. Kohli and Dhawan played some sensible cricket but it was Sami who removed both Dhawan and Raina in successive deliveries and brought Pakistan back into the match. Yuvraj and Kohli then played patiently and cleared the fence occasionally with some classy shots. Yuvraj while looking for a big one just fell short off the boundary and it was the Indian captain to come next. Kohli played with elegance and his typical inside-out cover drive off Afridi and Aamir left the Pakistani bowlers clueless. It was Dhoni who finished the match with a big one and the entire crowd erupted as Kohli waved his bat towards the Indian dressing room. India not only moved up in the points table they still hold the 11-0 unbeaten streak in world cups versus Pakistan.