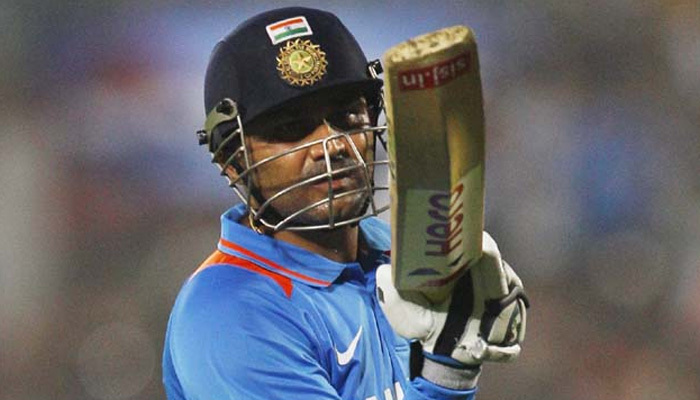 On his day he can created wonders with bat. We all know about the love story he had with hitting the first ball for four. A big match player and a big run getter Virender Sehwag announced his retirement earlier this day. His decision was not a big surprise to the fans. Aged 37, he played his last international game two-and-a-half years ago. There were no notable performances after that in ranji nor in IPL except for those rare 30s.

He was a genuine hitter of the cricket ball and a handy spinner. Numbers followed him the way he played his game with almost 16,859 runs and 136 wickets in his international career. But these numbers can’t explain Sehwag.

Sehwag always had his fans on edge of their seats. He was such a joy to watch. He never cared about being beaten by bowler. The very next ball he will charge down the pitch and hit it for a six. Very often it looked like two parallel matches were going on in the same ground. He used to play every delivery like it was the first delivery he was facing. At the same time he was criticised for being very inconsistent and was blamed for throwing away his wicket very cheaply. It was always like watching a thriller, you never know what is coming up. It was difficult for experts also to analyse his innings. He always played the way he has to play, people believe, the way cricket has to be played.

He had theories supporting his style of play. He believed not just bad balls, good balls also have to reach the boundary.

Having said all this he was not a blind hitter. He had theories supporting his style of play. He believed not just bad balls, good balls also have to reach the boundary. Bowler should be scared of bowling a bad ball which makes him bowl more of those. He was always a calm person and never had too many numbers in his mind. This made him a big match player. His stats against Australia and rivals Pakistan prove this. He will be remembered for his 2 triple centuries, ODI double century and most importantly all the boundaries he hit on the first ball.

Indian team right now have a gifted set of players and genuine match winners. Kohli, Rohit, Rahane are very entertaining to watch. But we have to accept the fact that we are missing the excitement of watching the batting line up that had Sehwag, Tendulkar, Dravid, Ganguly and Laxman. Neither Rohit’s 264 nor Kohli’s remarkable chase of 350 can be compared with Sehwag’s triple centuries or the partnerships between Dravid, Sachin and Laxman.

Kohli, Rohit, Rahane are very entertaining to watch. But we have to accept the fact that we are missing the excitement of watching the batting line up that had Sehwag, Tendulkar, Dravid, Ganguly and Laxman.

On his 37th Birthday, Guindy Times Wishes Virender Sehwag a very happy birthday. We wish his post retirement life is as exciting and entertaining as he used to bat.