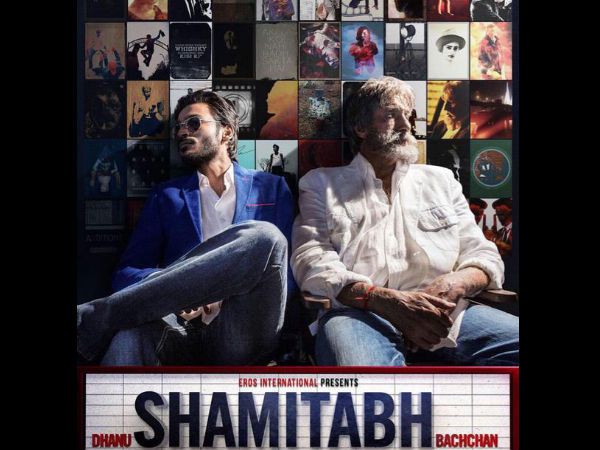 Shamithabh is a rather unusual plot that draws parallels with reality. The story is about a rather scrawny, talented, and mute boy that adopts the hypnotic baritone of a drunk scumbag to become Bollywood's best actor.

Silent Danish (Dhanush) and Amitabh (Amitabh) together bring a surreal zeal like when whiskey is mixed with water, however, separately fail to do so. The internal conflicts that occur between the two actors, the ego clashes between them is rather amusing to watch. Akshara plays the sensible in between, the Goth (dresses only in black) tom boy that helps both the actors realize the importance of the other. Her blank and straightforward reactions suit the character she plays.

Dhanush does not fail to surprise us. His acting is surreal. The intensity in his face, the ways he imitates Amitabh’s expression and his mouth movements in sync with Amitabh’s voice are a joy to watch. Big B's hypnotic voice, dialogue delivery and modulation take the movie to the next level. The "Pidley se Bhathae" makes you roll in laughter. He plays a generic wreck, wannabe actor, and egoistic alcoholic that lives in a graveyard. The sarcastic humour of this character keeps the movie going.

Hats off to the costume designer and make-up artist for making everyone in the film look nothing short of gorgeous. Even the supporting actors have done a reasonable job. A special mention to the little cute boy that played young Dhanush. He added a complementing touch to the movie. The songs bring out a comic sense and as usual Ilayaraja has done his job perfectly. The cinematography and graphics are also well done. The film however, spends quite some time critiquing the ways of Bollywood and emphasizes too much on the self-pity that Amitabh puts himself through, so that the second half does gets quite repetitive. There are certain aspects of the movie that can come under the category of "creative stupidity" which could have been cut short.

Overall the movie is a something different, something unique and of course, we must watch it for silent Dhanush and Amitabh!