All of us have special moments in life which, acting as turning points in our relationships with special people and being a constant source of happiness, are cherished forever. They remain fresh in our minds regardless of how many times we’ve relived them - just thinking about them gives us a jolt of energy and pleasure, which no words can describe. Vivega 2016, conducted by the Youth Red Cross (YRC) of CEG, is an event which aimed at creating such special moments in the lives of underprivileged children. Close to 100 children from four homes - Anaikum Karangal, Avvai Illam, Roshni Homes and Sistwa - took part in the event. 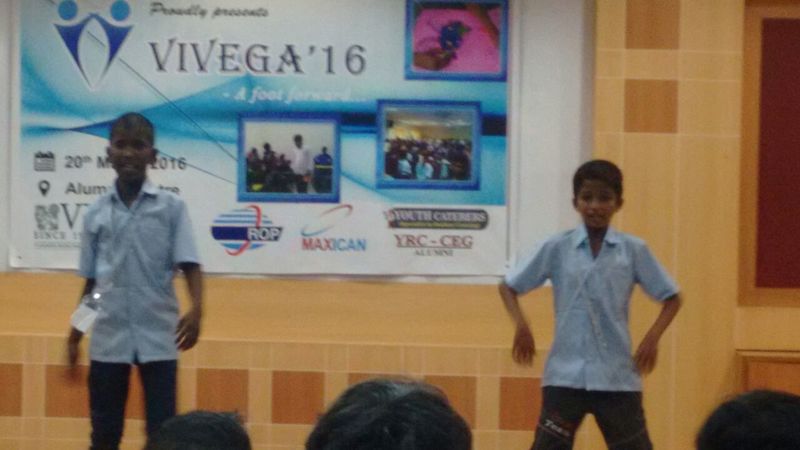 Vivega has been conducted annually for the past nine years to commemorate the birthday of Swami Vivekananda. Since the recent floods made it impossible to conduct it on January 12, this year’s version was organized on March 20, 2016, at the Alumni Centre. YRC Program Officer Mr. Narashiman welcomed the inaugural gathering at 9.30 a.m., following which YRC Co-ordinator Dr. B. Kumar, motivated the audience with his thoughts on perseverance in the presidential address. Dr.K.Vipinendran, Assistant Professor from the Printing Department who was the Chief Guest, took over to give an interactive and inspiring Keynote address. He narrated to the children gathered, a short story highlighting the importance of hard work and dedication. This was followed up by his handing out white sheets of paper to the kids and asking them to do crafts; they in turn stunned the organizers with their beautiful handiwork.

Another subtle-yet-impactful activity that he carried out, was one wherein he called two girls from the audience, and asked them to touch a point in the space surrounding them; both girls touched a low point, on which he asked children to always aim high - even in the case of touching random points, one should always aim high and strive to be the best.

After the opening ceremony, various competitions were conducted for the children. The first session, comprising of games such as Drawing, Fun with Words, Memory Games, Poetry Writing and Picture Quiz, was held between 11 a.m. to 12 p.m. Singing, Oration, Vivekananda Quiz and Math Puzzle, which formed the second session, was held between 12 p.m. to 1 p.m. After breaking for lunch, the third and final session consisting of Paper Drawing, General Quiz, Situational Handling and Dance was conducted from 2 p.m. to 3 p.m.

Following a thought-provoking performance by The Spartans, the valediction saw the launch of the YRC website by dignitaries Mr. S.Karthigai Chelvan and Dr.B.Kumar. The latter took to the stage to thank the various sponsors of Vivega for their constant support and ran through the various events conducted for the day. The chief guest for the evening, Mr. S.Karthigai Chelvan, then addressed the gathering, reminiscing about his childhood. He asked the children to dream high and create a future like how Dr.A.P.J.Abdul Kalam had envisioned. This was followed by the prize distribution ceremony where gifts and certificates were handed out to the various winners of the several events. The “Overall Trophy” was bagged by Avvai Illam. Bringing the event to a conclusion Mr.Subramanian, YRC Volunteer gave the vote of thanks.

Vivega 2016 was indeed a huge success for the children really loved it. It had indeed been one of their best days and they were going to cherish it forever. The success of Vivega lies not in its perfection but in the smiles of the children.