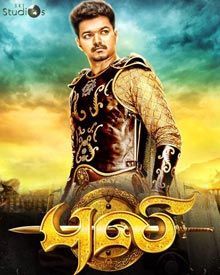 It takes courage and determination for one to sit through the entire movie Puli without covering their eyes and ears in vexation. I summed up my will and sat through the movie. In order to save you guys from going berserk, I am taking my time out to write this review. If the damage has already been done, then forgive me for writing it a tad late.

Puli starring Vijay, Sreedevi, Hansika, Shruti, Prabhu aside several veteran actors assumes itself to be magnanimous and ambitious but falls short by a huge margin. I am obliged to tell the storyline, which although clichéd is the story of a man who embarks on a journey to save a kingdom and his love from an evil tyrant. You are left wondering aloud at the end of the first half whether there exists a storyline at all. I had to stop myself from running out of the theatre for its sheer stupidity had me astounded. A film touted to be made especially for the kids had me questioning the common sense of the makers. Certain scenes may appeal to the younger audience but the idiocy of the movie was intolerable. I badly wanted a huge remote so I could fast forward the movie and get out of the theatre, which we did after 140 minutes of ultimate boredom.

I badly wanted a huge remote so I could fast forward the movie and get out of the theatre, which we did after 140 minutes of ultimate boredom.

Now getting into the nuances of the movie which I would gladly like to oversee but I bring forward it to you anyways. I believe a good cinematography makes a good movie. This movie didn’t have a visual appeal, both in its visual effects as well as the cinematography. It certainly wasn’t one of Nutty’s best works. A comparison with the epic Bahubali was inevitable with the visual effects playing a prominent role and similar storylines. Actor Sivakumar who appears for a scene or two could have had a better makeover for it was exactly like Kattappa (Sathyaraj) in Bahubali. The songs were another added disadvantage. They were totally uncalled for and they were very unpleasant on the ears.

A film which lacked in scope for acting saw a number of fantastic stars from the film industry come down to act in this movie. The talents of all these actors had been wasted on a dreary movie like this. You are left with exasperation at the dialogues which were supposed to play to the masses. They were meant as hints for Vijay’s political ascend which leave you frustrated. The story already lacking in common sense and logic is deficient of yet another important element –Screenplay. The movie travels at its own sweet pace, slower than the slowest of tortoise. If I have left out any point then it may probably mean that I am lacking words to describe how the movie lacks in them.

Vijay could have chosen a better script than Puli which is full of misses.

Vijay could have chosen a better script than Puli which is full of misses. If I have hurt Vijay fans, then forgive me for being blunt and honest. I can’t write false reviews for the sake of an actor who can’t choose wisely. You are speechless at the end of the movie and make a rush for the exit in hopes of getting relief from the splitting headache you have gained. I came out laughing hysterically at myself for having got tickets for this movie on an assumption that I could actually have the strength to endure the boredom.