To expect the unexpected might seem a little too cliché to the ones who expect the exceptional.  If this phrase rings a bell to you or forms a mental image of being printed on a poster, don’t get your intuitions wrong. The Association of Ceramics technologists, Anna University hosted a national level student’s technical symposium “ConCerT’16”, expect the exceptional from March 29th to March 31st of 2016.

This 12th edition of the symposium was inaugurated by Dr. Raju, Deputy Director General, Geological Survey of India (GSI) and was presided over by Dr. S. Sivanesan, Dean, AC tech campus. As per the custom, members of ACERT (Association of Ceramic Technologists) organize ConCerT every year. And this year unlike other years had major time restraints due to the floods that struck Chennai. Having minimal time in hand, the members put them to efficient use by absolute team work and smart planning. After all, when passionate students come together the output is surely to make an impact in the minds of everyone present. With almost 200 participants the crowd expectancy was definitely satisfying say the coordinators. Prior to ConCerT'16, “endurance’16”, a marathon, to create awareness on voting in the upcoming elections and “whiz kids”, a competition for physically challenged kids were organized by the ACERT. 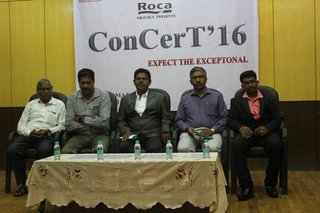 Speak about versatility. The symposium had covered almost all domains in terms of guest lectures, workshops and events. Breaking all conventional standards, “ConCerT'16” went a step ahead to organize and conduct a wide range of events like Adzap, short film festival, paper presentation, quizzes, choreo night and what not.  It was a perfect package of fun and learning within the given 3 days. With around 8 guest lectures, 3 workshops and 15 events to take part in, the participants found it to be extremely informative enabling them to master the practicality hidden behind all the theories they’ve been learning so far.

On striking a conversation with Srinithi, one of the members of ACERT it was understood that her fellow mates managed to pull up an excellent show in spite of all the restrictions and obstacles involved. They hope the forthcoming years also keep up the standards of the symposium and are eager to watch them grow exponentially along with the success of their symposium.

Kudos to their team!