Meet Mr. Ram, Mr.  Kumaravel, Mr. Ashok, Mr. Mani and Mr. Gopinath. The average age of these five people is about 50. But don't let that fool you. Spending an hour with them made me feel like I was a lazy old man in my 90's. Passionate, enthusiastic, cheerful, happy, successful are all words that fall short of describing this lively gang of alumni, all five of them from four different batches from four different decades in our college.

After about five minutes hearing them reminisce about our college, from the time it was called AUPT to how the canteen food has always been cheap, I almost forgot that I was supposed to be doing an interview with them.

But before we go any further introductions are due. Ram is an employee at IBM and a graduate of the class of '84, Kumaravel heads his own business in network design and is a graduate of Electronics and Communications Engineering, class of '84, the first in the 4 year undergraduate program. Ashok works at Newgen education, Mani in Groupon while Gopinath the youngest of the group is a 2011 pass-out. So what is it that brought these five alumni together? Was it the fact that they all had the same Alma Mater? Not really. This group of five people, who I shall, for the purpose of this article, call "The Gang", are all passionate about one thing. Running.

I needed a running partner and so I started Chennai Runners. I didn't expect for it to become this big!

What started out as a small Google group initiative for Ram to find a running partner, has grown into a huge organization of sorts called Chennai Runners with chapters of its own. He explains, "I started running because I had this need to be an outdoor person. I'd just been back from the US after many years and running was the easiest thing to do on Chennai roads. I needed a running partner and so I started Chennai Runners. I didn't expect for it to become this big".

For the others though, their advent into running is an interesting story in itself. When Kumaravel, a businessman who works almost 20 hours a day was diagnosed with diabetes, he knew he had to make a major change in his lifestyle. His firm disbelief in spending on Gym renewals or "contributions" as he calls them led him to Chennai Runners.

For Ashok, his wife was his biggest motivator. After driving his wife and their children to various marathons, he'd gotten tired of being the chauffeur and took matters into his own hands. He explains, "The most running I'd done before Chennai runners is the 50m running race at my children's sports day". With pride he adds "I always came first". Finishing his 35km run a few weeks ago despite his health condition has been a huge leap. The jump from 50m to 35km however hasn't all been a bed of roses. "Most people start by trying to go all the way. It doesn't work that way. You start with 5km, then 10, then 15 and then you slowly start improving." 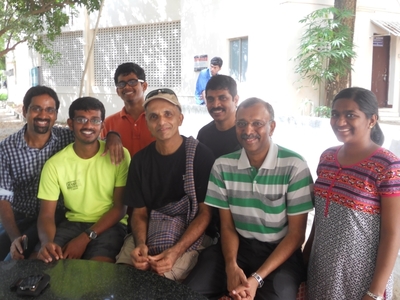 It is this step by step process that is facilitated by Chennai Runners through Community running. In simple terms, community running works on the principle of "The more, the merrier". An interesting way to explain what Chennai Runners does is to try and visualize this. Think about walking or perhaps jogging from the Main Building to Gurunath and back at 5am, all alone, once. Now think about doing the same, but with all your best friends, sharing stories, college gossip dating advice and everything under the sun. That's how much fun these runners have on a regular weekend run or a marathon.

I've made a lot of friends in almost every area in Chennai. The advantage is, now wherever I am, I can always drop into one of their places for some food or a cup of coffee

“It isn't just the sense of community that running gives”, Explains Mani, "Running makes you feel a lot younger and more energetic. It keeps illnesses away and gives you more confidence, and physical and mental endurance". But the best part about community running? Gopinath elaborates, "I've made a lot of friends in almost every area in Chennai. The advantage is, now wherever I am, I can always drop into one of their places for some food or a cup of coffee", he adds jokingly. Well that's one reason I definitely wouldn't mind running for.

Chennai Runners is the organization that organizes the annual Wipro Chennai Marathon, Scheduled to happen on the 7th of December this year. Initially a long distance run in ECR, the Chennai marathon moved inside the city in 2011 citing safety issues. With about 5000 people participating the first year, there's been no turning back since then. Veteran of more than 50 marathons worldwide Ram, has big dreams for the Chennai marathon. He believes that with enough community participation, Chennai could join the few elite marathon cities in the world including Tokyo, Berlin, Boston, Chicago and London. "There are a few challenges though", says Ram. " The event management companies in Chennai aren't equipped enough to handle a marathon, as the kind of planning that goes into it is mostly different from the work they usually do". The others believe that the biggest challenge to organizing a marathon in Chennai is to bring in community support for the marathon. In contrast to other Indian and International cities, where people bring music systems to support the runners and handle aid stations to supply refreshments, Chennaites haven’t completely embraced the marathon culture.

Just go out there and start running!

For people who want to start running, Chennai Runners have only one thing to say, Just go out there and start running. You can get in touch with Chennai Runners on their Facebook page and if you want to register for the marathon or simply volunteer for it with friends, logon to http://thewiprochennaimarathon.com/.