You never expect a team to start well, leave alone Chelsea, after having a winless pre-season. And it turned out to be the same for the neutrals, after failing to start their season with a home win against Swansea, in a game full of controversial incidents.

Diego Costa shook off his hamstring problem to start the game, and in this fixture last season, he scored a hattrick

Chelsea’s main threats were Bafetimbi Gomis and Jefferson Montero, both who combined to give Swansea their equalizer through Andre Ayew, the former Marseille striker, and he constantly gave Chelsea’s defense a torrid time

Both teams had their chances, Courtois and Fabianski were busy all game. But all that chance when controversy came in the form of a red card for Chelsea’s goalkeeper Thibaut Courtois, who was said to have fouled Gomis inside the area and deny him a clear goalscoring opportunity.

However, replays suggested otherwise, with Gomis taking the ball away from goal and the foul being marginally outside the area, and he gleefully scored past Chelsea debutant Asmir Begovic, who came in place of Oscar, who was Chelsea’s best player of the day.

Gomis turned Montero’s ball in just before the 75-minute mark, only to find himself in an offside position.

Diego Costa wasn’t as clinical as he used to be, and he was on the receiving end of 2/3 free-kicks which Michael Oliver waved away.

The introductions of Kurt Zouma and Radamel Falcao did improve Chelsea a bit, but wasn’t enough to secure the 3 points.

Swansea had replace the injured Ki with former Chelsea youngter Jack Cork, and the bringing on of Wayne Routledge and Eder added Swansea more flavor to their attacking and defensive nature respectively. 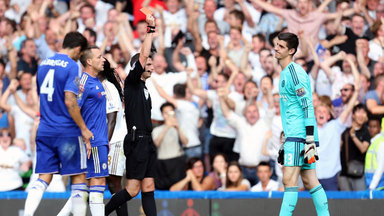 Courtois's Red Card that changed the complexion of the game