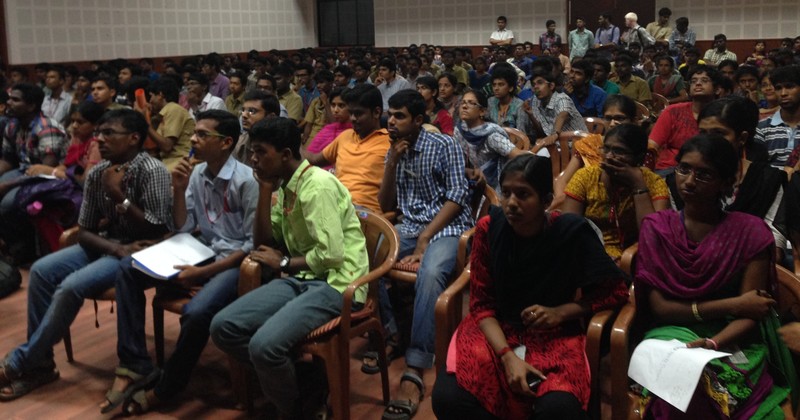 September 15 is observed as Engineers’ day. So in order to celebrate this day in a meaningful and useful manner, CEG Tech Forum (CTF) conducted a quiz for AU students which was open to all the years, giving special importance to freshers since this was the first event they would be participating in, after coming to college. Also this quiz wasn’t based on technical engineering knowledge but a more general one to encourage more fresher participation.

There was a good turnout for the event with Tag auditorium being filled to capacity, and CTF was proud to say that there was a humongous response from the  freshers, putting a tick against the main target of this event.

CTF also took this event as a chance to talk about Kurukshetra- CEG's techno management fest which happens every year. There was also a promo which gave a brief introduction to the term 'Big Data' emphasizing the need for big data in today’s cyber world as the dependence of computers and networks in today’s world has increased by atleast a thousand times since the last decade. “Beginning of ‘The Big Data Revolution’ “ was the catchy tagline for this promo.

And about how our budding engineers felt about this event, some freshers responded that the standard of this quiz was quite high, since they managed to answer only a couple of questions correctly. They also told that they realized how much they should improve their standards in terms of quizzing and they felt thankful to the event for making them realize that. At the end of the day, they had fun, they said, putting their thinking caps on, to answer the questions. A regular at all campus quizzes noted that the quiz was of good standards.

Preparations for this event started atleast three weeks back and the organizers from CTF were really happy with the massive response it received.