Aurora 2K14 is this year’s version of the Teacher’s Day Celebrations organised by The Department of Chemical Engineering, ACTech.

Classroom 201 (a comfortable 130-seater) was converted into a mini hall-of-sorts, with red curtains draped across each of the eight windows, and the blackboard rendered unrecognisable by covering it in golden drapes with red-and-beige panels. It was a regular classroom that now felt like a festive, vibrant auditorium, complete with artistically-arranged balloons flecking the walls.

At exactly 2pm, people began trickling in and, half-an-hour later, when the hall was filled to capacity, the program had officially begun.

A slideshow translated the comperer’s speech into visual imagery, following which the ACT Dean and the HoD, along with three yesteryear professors, were welcomed to the seats of honour on the dais. This was followed by a description of the profiles of our Chief Guests, after which K.Dhanasekar, a third-year student, read out a Tamil Poem about the magnanimity of the teaching profession.

The Dean then addressed the audience, launching into pure Tamil after the salutary “Respected dignitaries….” opening. He spoke about how it was essential for teachers to gain the trust and confidence of students for their overall development. This was followed by the addresses of the HoD, and the two retired professors, who fondly reminisced their days here in college, being taught by first-generation faculty members including the pioneering legend Dr. Laddha himself.

On the heels of this series of addresses, was another one by eminent department professors, who outlined the changes in the attitudes and formalities that the Indian college education system had witnessed over the past 25 years, speaking of the days when professors would work shifts to evaluate answer scripts at Rs.2 / paper. 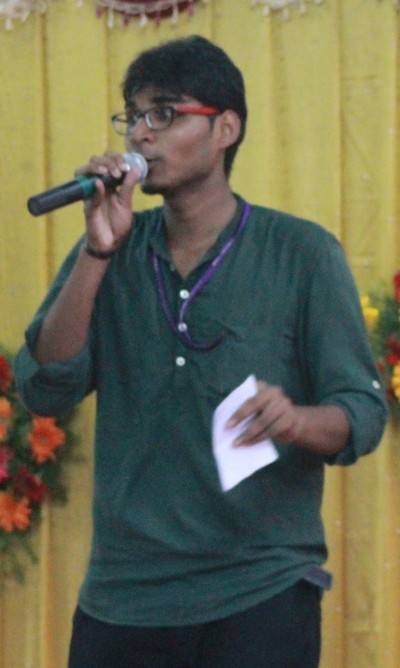 After this, the album ‘Aasan’ - composed, rendered and recorded entirely by department students, and released by none other than our erstwhile President Dr. A.P.J.Abdul Kalam - was played out in the hall.

Following this, there was a cake-cutting ceremony to mark the birthday of the Dean (which also happened to be today), with several cans of confetti burst around the room.

This then set on the start of the informal events.

The first one involved a slideshow featuring photos of department staff in their childhood days, asking the teachers to guess who it was. Several people were surprised at how uncannily good-looking some of the professors had been, back when they were like us.

After this came the Memory Game, where teachers had to list out the names of 50 items displayed in rapid succession.

The third action in line was a mime centred around an episode of the Mr.Bean series. The range of emotions conveyed in the absence of a single sound, entirely by facial expressions and body language alone, was astounding.

Throughout these events, an underlying game that was being played was Bingo - except that we decided to implement it the unconventional way this time. Instead of reading out numbers at random, faculty members were handed charts of filled-in 5x5 squares, and were told to pay sharp attention to the proceedings, as the numbers would be read out at several points throughout the games. The first person to get three sets of five-numbers-in-a-line would, as usual, be declared the winner.

The last of the games was ChemConnections, (inspired by the Vijay TV show of the same name), which had a slideshow of a chain of pictures depicting common engineering terminology, had the faculty in splits and the students cheering loud enough to be heard in the neighbouring SAP campus. Needless to say, it was a smashing hit.

This was followed by a prize-distribution ceremony for teachers who had won the many outdoor events conducted by students as part of the week’s celebrations - the badminton league tournament, the throwball championship, along with staples such as Musical Chairs, Tug-of-War, and a Balloon-Shooting Contest.

Following this, all winners and runners-up assembled on the stage and posed with their trophies in their outstretched palms, students sitting in front. And at this moment, I kid you not, the sound system (which had been providing uninterrupted, TV-show-like bgm for the whole function) played out, “Engal Veettil Ella Naalum Karthigai”, to guffaws from the audience (and I’m sure, from you too, reader.)

The informals came to a close after a group dance to evergreen hits of the ‘70s and ‘80s - the purpose being to take our faculty back to the days of their youth.

The program drew to a close as we presented faculty members with framed photographs of them resembling the monarchs of yore.

This was followed by all students emptying the hall and lining along the corridor walls to afford our teachers a red-carpet exit, worthy of the VIPs that they are.