After being blown away by Dhanush’s movies in the recent past, Anegan comes across as quite a blow. The movie which is supposed to be classified under the ‘romance’ genre, is a confusing screen play of the same characters in 4 different time zones acting under the pretence of ‘pure love’. 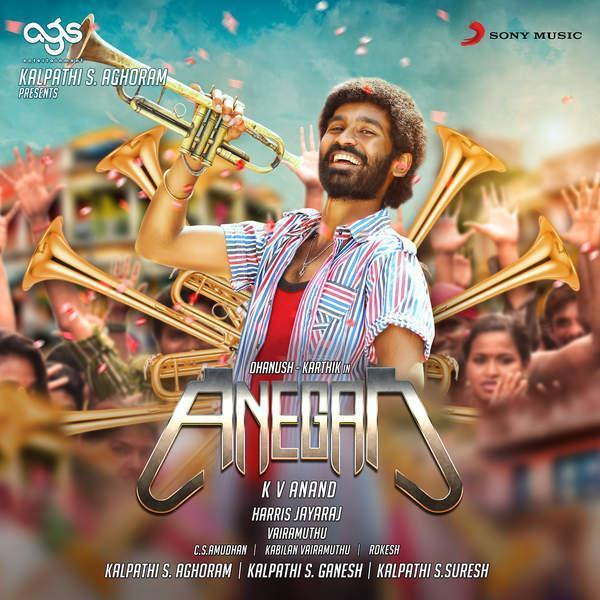 The movie begins with the ‘first’ flash-black in 1960’s Burma. Oh yes, there is more than 1 flash-back, oh wait there are 3 gruesome flash backs that all somehow simultaneously connect to present time eventually. So, there starts the sweet, innocent and obvious love story between a rich & beautiful girl Samudra(Amyra Dastur) falling for a destitute, dead-lock nourished Munaruna (Dhanush). Trust me when I say that his name in this part of the story is ‘munaruna’. They dance, play and run around like carefree 12-year olds. Then as each story demands, the villain who wishes to separate them under any circumstance hunts them down. After putting up a brave fight they sacrifice themselves for love and oh-so-cinematically fall off the deck of a ship.

Drifting back to reality, we discover that a hypnotised Madhu(Amyra) is narrating incidents of her past life to her pychiatrist. Madhu and Ashwin (present-day Dhanush), Jagan and Kiran (Karthi) all work for a ‘hi-fi’ gaming company called ‘Tentacles’ (which for the record was written all over the office in weird font that it could easily be misread). On seeing Ashwin, Madhu immediately knows that they are meant to be together as true love is all about the guy who appears in your dreams, who cares if he a total stranger in reality right?

Madhu is not only so gifted that she remembers every detail of her past, she also hallucinates in the present, drives off a bridge whilst remembering & re-enacting the past and constantly annoys everyone by narrating incidents from the past and present simultaneously. Confusion? Bam. Exactly!

Basically each time Madhu visits her shrink, there is scope for another flash-back with the same plot. Poor Dhanush falls for the pretty Amyra. Dhanush is never better off than the heroine in looks or wealth in any of the stories, but of course, true love holds no barriers. Often there are songs where most of the story of the flash-backs are shown, the rest are fight sequences where, as usual puny Dhanush makes hefty goons run for their lives. Eventually it all comes down to the fact that, the movie gives you around three hours to figure out who the main villain is so that Dhanush can finally get rid of them to live happily with his ‘true love’.

The movie is absurd in totality. The sound effects are beyond any humanely tolerable levels and songs don’t exactly leave a big impact on you. Amyra is certainly gorgeous which makes hearing her blabber easy on the eyes. Repeating characters only spur more confusion rather than help putting pieces of the jigsaw together. K.V.Anand’s attempt at linking god and love beyond life spans is unconvincing. Watch Anegan if you booked your tickets before reading this review!