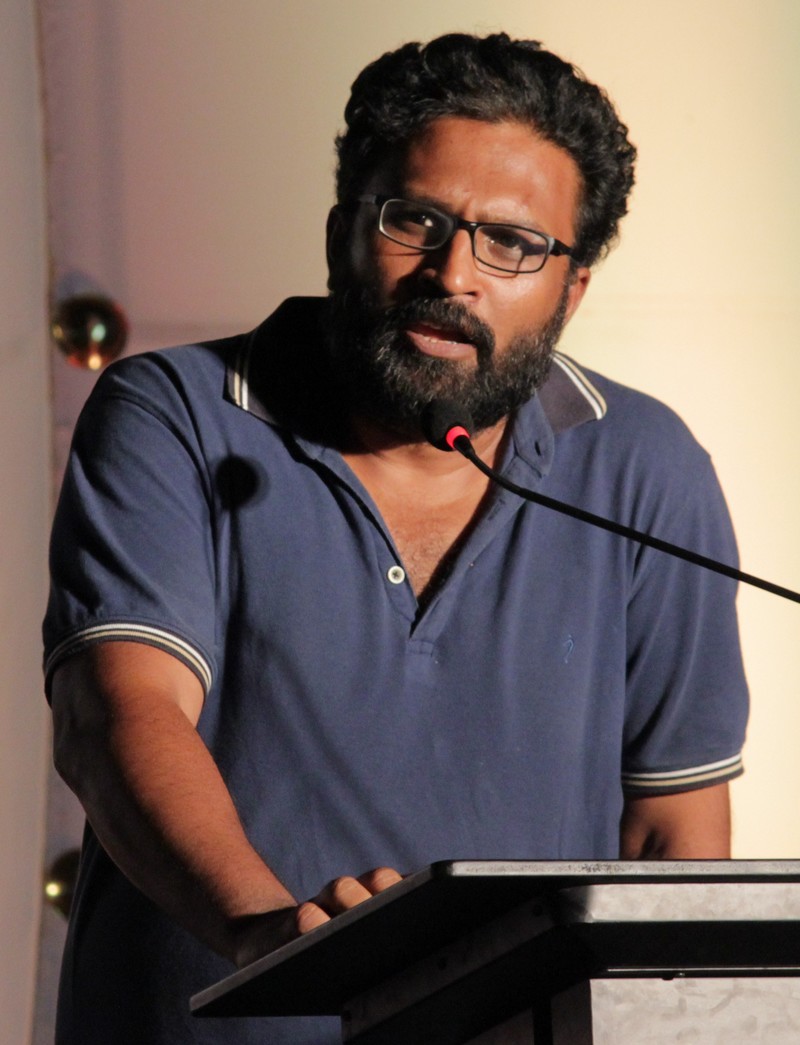 With white fairy-lights draped over the trees and poles on the ground, the ACT quadrangle exuded a festive aura when its two blocks of blue chairs were completely filled by red-tagged first-years, 20 minutes into the inauguration, while the seniors stood in clusters around the ground, running around to ensure the smooth progression of events.

The ceremony was kick-started with the MC welcoming the day’s Chief Guests - Director Ram and Producer Satish Kumar, of Thanga Meengal fame - on to the dais, just as ‘Ananda Yaazhai’ played out from the speakers, on cue. After singing the Tamil Thaai Vaazhthu and lighting the kuthuvilakku, the Cultural Secretary, Mr. Faisal Rehman delivered the welcome address, noting that Sampradha was stepping into its 13th year now, and encouraged the audience to make themselves part of the 30+ events slated to take place tomorrow.

The Dean then presented mementoes to Direct Ram, both of whose movies have won strong critical acclaim and three National Awards, and to Producer Satish Kumar.

The Dean then addressed the freshers, stating that this was a perfect starting opportunity for them to showcase their talents in college, and to make friends with the seniors.

The floor was then open to questions from the audience, for an interactive session with Director Ram, who first stated that he was enthralled by the campus. When prodded for a reason, he said it is not because our students jabber fluently in English (or because it’s home to the cream of the crop, or because our placements rank among the best in the state, and all other such lies we tell the outside world), but because it is rare to find a campus in the heart of the city with as much as lush greenery as infrastructure.

When a first-year asked what he needed to do to sign up as Ram’s assistant director, the latter replied that the first step would be to NOT ask him such questions from an audience

He also stressed that starting up and running your own business while employing several others, though hard at first, leaves you with a sense of satisfaction like nothing else. Having always wanted to do this, he also confessed to not having sat down for a single job interview all his life - a scenario that many of us would shudder to even think of - and with just his second film bagging three National Awards, look where he is now.

The interactive session saw feverish participation from the audience. When asked which of his films he liked best, he said he didn’t like any of them now, because their post-production operations involved him watching the entire thing over and over again, so much so that all its flaws became glaringly visible to him, giving us a glimpse of the perfectionist. When a first-year asked what he needed to do to sign up as Ram’s assistant director, the latter replied that the first step would be to NOT ask him such questions from an audience, to raucous applause from all present.

Producer Satish Kumar then shared his thoughts on the event, outlining the importance of maintaining a well-rounded personality. This was followed by the SAAS-ACT VP, Tarun, delivering the Vote of Thanks. The National Anthem then recited, after which everyone disbanded to attend the screening of Rajinikanth’s ‘Thalapathy’ in the main gallery.

The writer is a naturally-high person who loves trying out new stuff.