It was a beautiful summer evening on March 1, 2018 when the present students of Anna University met up with their seniors who passed out about 30 – 40 years ago. The general conception among students is to move out of college, achieve goals in life and possibly be recognized by your own college for it. However, this meet was a felicitation function initiated by the seniors of Anna University for the current students. This element was indeed very fascinating.

The event kick started at the Alumni building in CEG with a warm welcome speech by Mr. D. Thirunakkarasu, an active member of the committee. He told the young audience how important it was to leave a mark behind in any institution we study in. The President of the Alumni Association of CEG (AACEG), Mr. D. Vasudevan showed a picture of his college days at CEG and shared his delightful experiences. He thanked the student writers who contributed to the E news journal of AACEG which is circulated amongst all alumni of Anna University spread across the globe. Mr. S. V. Ramasamy, the Editor of the CEG Alumni E-News was a bubbly co-coordinator throughout the program and while being so, he spoke about the good old memories that he still cherishes from CEG. He then called upon Mr. Swaminathan, the current student advisor of CEG who encouraged the student authors to pursue their talent which he referred to as being unique.  Dr. Stars Jasmine, an Assistant Professor in the English department and the Editor in Chief of the Guindy Times, thanked the alumni for felicitating her students. She mentioned that despite the younger generations out-growing the older ones in terms of technology and creative ideas, the experience received by the latter is simply unparalleled. She also called this a meeting of the old brains with the new ones and that together even the impossible problems could be solved. This was followed by Keerthana Chellappan, the President of the Guindy Times. She heartily thanked the AACEG members for recognizing the work of their student writers and promised to extend support from the Guindy Times to the e-journal of AACEG. Hardcopies of the latest E-news edition were then distributed to the audience. 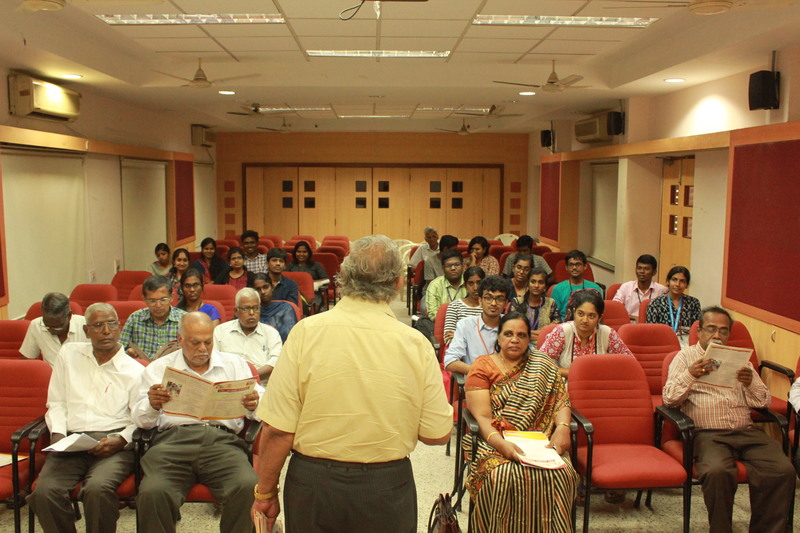 Soon enough, the 12 student writers who contributed to the E-news journal of AACEG between March 2017 and February 2018, were called upon the stage to receive their certificates. This was coordinated by Mr. D.S.L. Prasad who is also an office bearer of the AACEG. Each student was also given a book as a memento. The joyous evening came to an end with the official vote of thanks by Mr. S.V. Ramasamy. The members later had a heart to heart conversation with the students over tea and thus bonds were made.

The reason for calling this a reverse felicitation was that despite being many decades younger to the committee members, the students were treated nothing less than an awardee. Their remarkable down to earth personalities are what makes these easily approachable members stand out from the rest.