Saptham, the official classical music and dance club of CEG supported by the Alumni Association, held an enchanting event at Tag Audi recently.

Titled ‘A Tribute to Balamurali Krishna’, the event turned out to be a musical homage to the legend through his songs. This truly brought the aroma of Margazhi Season all over the campus.

The event opened with Reshma G. from M.Sc Media Science presenting 'Paripari nee paadame' in Hamsadhwani, an invocation to lord Vinayaka. With her footwork, precision and graceful movements, she depicted the lord as the destroyer of obstacles through gestures portraying the elephant head.

Sri Vidya, a final year ECE student then took the stage,  dancing to Tyagaraja’s Pancharatna Krithi 'Jagadhanandhakaraka' in the ragam 'Nattai'. The gist of the song conveys the ‘Seetha Swayavaram’ that energetically set the tone for the rest of the evening.

Reshma’s rendition of Swathi Thirunal’s  Sankara Sri Giri revealed her brilliance as a Kuchipudi dancer.  With a dramatic 'jathi' and her ability to balance on one leg with the other held by hand. This scintillating piece set in praise of Shiva Thandava kept the audience spellbound. 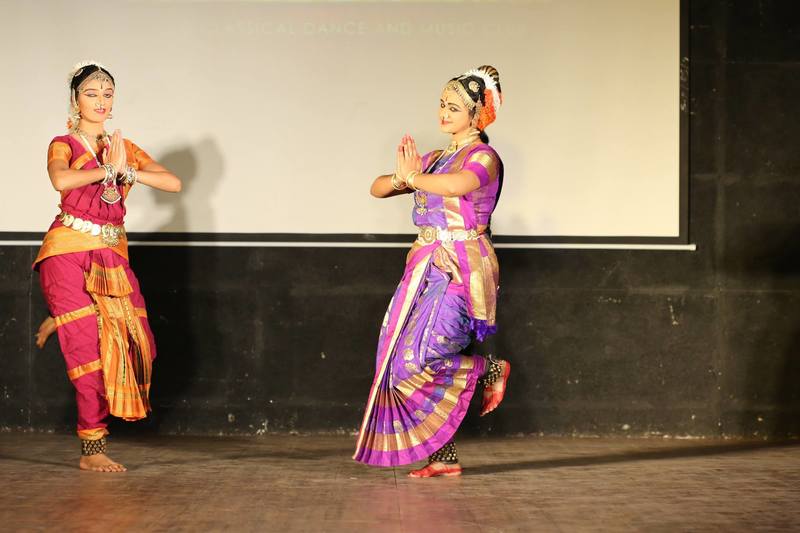 While Oothukadu Venkatasubbaiyer’s “Maadumeikkum Kanne” by Sri Vidya had a folksy lilt to it, with light-hearted histrionics. Her deft movements and expressions were beautiful, especially as Yashoda playing around and pampering little Krishna.

The experimental Tarangam interwoven into Vidwan Balamurali’s varnam composition "Amma Anandadayini” in Gambira Nattai was a winner, with grace-abounding postures and rhythmic interludes. The electric pauses and changing accents made for a riveting fare. Reshma’s stage spacings, alternately balanced on the rim of the brass plate and off it on the plain floor, were smooth.

This was followed by a 'Padam' on Lord Muruga set to ragam 'Sriranjani', in which Lord Muruga and the maiden in love with him were portrayed beautifully in Sri Vidya’s abhinayas. The gradual shift to 'Kanda Nal Mudalai' in ragam Madhuvanti  received great applause from the audience.

Next was an electric fusion set to a  seven- beat cycle, where Reshma displayed her talent with splendour, much like a peacock dancing with its unfurled plume.

This song was a prayer to the God of Dance to grant the dancer the beauty of a dancing peacock and many other forms of nature's beauty. Presented in slightly fast tempo, it definitely raised the standard of the event.

An episode from Narayana Theerthar’s ‘Sri Krishna Leela Tarangini' by Sri Vidya enthralled everyone. The next performance was a Javali, 'Marulu Minchera' , written by Balamuralikrishna in raga Senchurutti, set to Misra Chapu talam. A Thillana set in Kuntalavarali was the concluding piece, followed by the maestro's own mangalam composition.

The Chief Guest of the Day, Charukesi Mr. Viswanathan graced the occasion and and shared interesting anecdotes about his association with Balamurali Krishna. He spoke of how Balamurali Krishna’s musical compositions patronized classical dance. Mr.Vasudevan, President of Alumni Association brought out the initiative behind the event to inculcate a passion towards traditional music and dance in young minds.

This well-conceived recital also underlined the commonality and difference between the Bharatanatyam and Kuchipudi styles of dance.

The event was nothing short of a 'Sabha' performance, and was a soulful tribute to the great legend- one who resides in every overtone of music.