Freshers’ Day is meant for the first years to get to know about the various activities happening in college. Continuing this proud tradition, seniors and newcomers mingled with each other during the Freshers' Day and Inauguration of SA-AS (Students’ Association and Arts Society) held on 29th August 2017 in the Vivekananda Auditorium, CEG at 4.30PM. Respected Dean, Dr. T.V. Geetha, Student Advisors, Dr. Swaminathan and Dr.Pradeep Kumar inaugurated the event with the ThamizhThaaiVaazthu and the lighting of the ceremonial lamp (KuthuVilaku) along with the core members of the SA-AS.

The event was graced with the presence of our beloved chief guests, Actor Anand Ram of MeesayaMuruku fame, and Vijay VZ from ErumaSaani, a social media based crew with a huge fan base in the city. They were presented with gifts and mementos by the Dean. She was the honored by the President of Students’ Association (SA).

The welcome address was presented by the Lady President of SA, who synopsized the fun and entertainment the juniors were about to experience in the forthcoming hours. This was followed by a keynote address by our Dean, who humorously addressed the gathering with a motivational touch to achieve something bigger, not just academically, much like our chief guests. Next in line, our Student Advisor, Dr. Swaminathan, listed the procedure by which the members of SA and the core of Arts Society were selected by the committee formed and headed by the Dean, and also the functions and activities that will be carried out by the SA-AS, CEG, including Agni, the intra-college cultural fest and Techofes, South India’s biggest inter-college cultural fest. 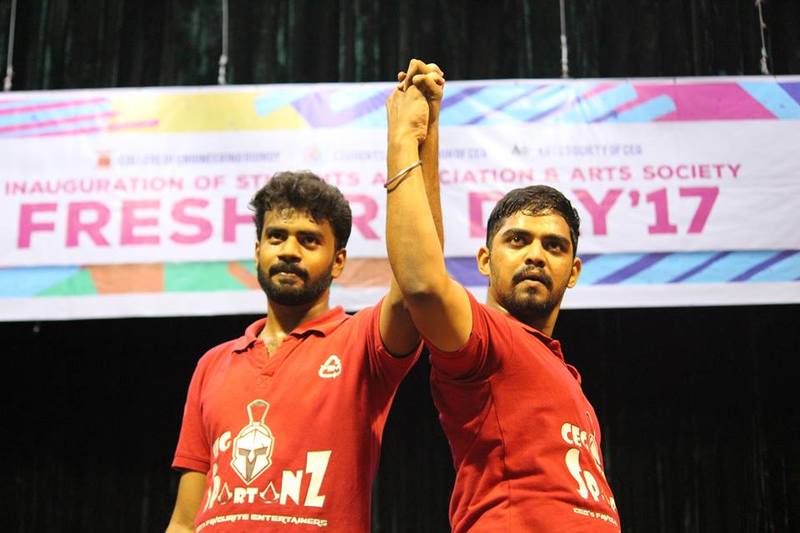 Following this, Anand Ram addressed the crowd, explaining his career and the struggles he faced before achieving success. He also thanked HipHopAadhi who gave him the first big opportunity to step into the limelight. Vijay VZ had the crowd cheering with his steps and dialogues from ErumaSaani. Both of them answered all the questions posed by the audience with patience and love. They finally thanked the crowd for their energy and the cultural performers for keeping them on the edge of their seats.

Two short films were screened for the purple tags by our intra-college crews. One from Nee YaarudaKomali, a team from the Media Science Department, which portrayed the life of engineers in CEG, and another from Mafias Entertainment, a group which produces short films and variety shows within the college, which highlighted the different kinds of people in CEG who’ll be remembered forever even after their college days are over, in an extremely humorous manner.

This was followed by the performances of the intra-college teams for dance like Get Ready Folks (GRF) and the teams for variety shows like Mafias, Stunners and Paampoom, which made the audience shout out for the performers for performing without any drop in energy.

The program concluded with the launch of the Agni promo, the vote of thanks by male Vice President of SA and finally, the national anthem. The freshers’ thanked the Dean, staff and seniors students for hosting an enjoyable program that they could cherish lifelong.

On the next day, 30th August 2017, the movie Meesaya Muruku was screened for the Purple Tags from 7PM in the main gallery.

The Guindy Times, wishes the purple tags all the best for their next 4 years in this prestigious institution.