Start where you are. Use what you have. Do what you can.

College is full of fun throughout the year and we need not necessarily wait for the even semesters to enjoy the cultural fests and department symposiums. Every fresher (which even we were, a year back) takes a year to understand this experience of the “Ranganathan Street Crowds” inside our own campus during the counselling process. 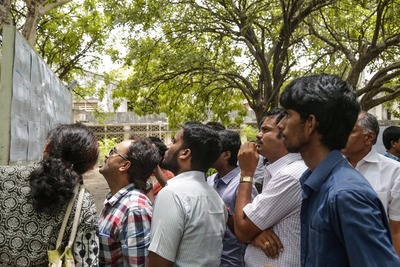 Counselling is indeed a different experience & this season it was no different. As this time we were the spectators of the tensed faces and not one among them. The race to class became tougher with people pouring inside our university; our tables, chairs, benches and meeting points were already occupied and above all we were seen with admiring eyes throughout the month of July.

We could notice each heart longing to wear the tag like we do and strut around in this beautiful campus. After all, with the Anna University brand, the fountains and nature and of course, not to mention the awesome seniors (Us) who would want to miss it!

The counseling is over, yet Anna University never loses its charm. More has been added to it as we now welcome our new set of “CEGians” & “ACTians” for the orientation. It was a similar crowd as we had witnessed in the past month but this time instead of tensed faces we were able to see determined ones; we see faces with the sense of pride in them; emotional ones who had come from far off and of course most faces looking lost in our big campus and we could also see faces filled with new dreams, having successfully realized their previous ones.

On one side of the campus, the orientation took place in TAG auditorium at different timings for CEG. The stage was glorified with the presence of Vice-Chancellor Dr. M. Rajaram (who made sure he did not miss the orientation even after attending our Former President Dr. A. P. J Abdul Kalam sir’s cremation at Rameshwaram), Dean Dr. P. Narayanaswamy, Students’ Advisors Dr. S. Swamynathan and Dr. M. Pradeep Kumar, the HOD’s of various departments, Heads of the Centers in our college and in-charges of respective facilities.

On the other side of the campus, the orientation took place in the Raman auditorium in a similar way with ACT Dean Dr. S. Sivanesan, Student Advisors Dr. Meenakshi Sundaram and Dr. S. Renganathan, the HODs of the constituent departments, Faculty Advisors and the Directors of major facilities in campus, such as the RCC, the CUIC, the Sports Board, and the KDC.

After the Vice-Chancellor and Dean had addressed the students, each HOD elucidated their stream and mentioned the facilities offered to the students from their departments. This was followed by introducing the excellent library, Wi-Fi tress and other amenities the college provided to its students. The students were also given an idea on the Credit Base Choice System (CBCS) where they were offered to choose electives from other branches based on their interest that comes to effect after the first year of their course. A brief on the personality development courses was also given.

The timetable for the students has been put up and the classes are set to commence this Monday (3rd, August 2015). Post-lunch, all the students were taken a tour around the college along with their respective class advisors.

The Guindy Times welcomes the new “CEGians, ACTians and SAPians” with a large heart and wishes all luck for their years ahead.