Theatron is back with their yearly productions, staging two plays- one in English and the other in Tamil at the TAG auditorium, Anna University on 22nd February, 2019.

The English play titled 'The Time of Our Lives', directed by Shaik Mathaar, was themed on relationships. It revolved around Manick and Vasundra who were in a relationship during their time in college but parted ways after that. Several years later, they accidentally ran into each other at an airport while they were waiting for their respective families. They decide to go to a coffee shop to kill time and consequently, a flashback takes place. We learn that they got to know each other through a common friend of theirs. Things started to heat up and soon they were in a relationship. The parting scene was presented to us in the form of a sort-of-a-relationship-advice monologue delivered by them in turns which was nothing short of brilliance. Back to the present, the girl reveals that she is a lesbian. The boy decides to leave, much to the girl's shock. It ended with her wife arriving at the scene and talking about the trip!

The play introduced an element of humor wherever possible. On the whole, it was a simple theme with decent execution.

The Tamil play 'Sarvaadhikaari' directed by Harish.K.P, mocks how leniently the political system operates for rich men in power. The plot is set in 2030 where India has completely disintegrated due to the onslaught of China's nuclear weapons, which happened because the President of India insulted Dalai Lama. The chain of democracy is completely broken. But there is one person who claims to be the CA (Sarvaadhikaari) whose identity is unknown and reigns the war-torn India in silence.

Gautam Viswanath is a rich, vicious businessman. A terrorist from the Chinese border sniffs around to locate Gautam and assassinate him. As such, Gautam wants the Indian Army to guard him, the provision for which is not found in the law. The extent to which he would go to get it done consisted of some extremely questionable acts and makes his self-centered nature more evident. The cast exhibited brilliant acting and the monologue Gautam delivered at the opening scene was remarkably fun. He effortlessly shifted from a dominating boss to a fidgeting, meager assistant to a sycophant who goes to any length to please the CA.

Next is Annatchi, one who runs an institution-kind-of-business meant for training slaves (adimaigal) and selling them. Gautam is aided by him and he has an alleged girlfriend Sushma, who also happens to be Gautam's wife. His body language and dialogue delivery were very comical, resembling a typical annatchi!

Another role, Sombanadha remained hugely important in contributing to the play's success. The character was a sheer mockery of the way in which saamiyars function in our country. The dialogues, his intonations and body language were so apt.

In general, the dialogues were well-written and extremely humorous. Be it the most trivial one or the most important one, everyone did justice to their roles and used their stage time very well. The characters, script & dialogues all contributed equally to the play's success. The crew exhibited appreciable levels of professionalism. Both the plays managed to keep hold of our attention till the end aand gradually made us become oblivious to everything else, marking their grand. success. 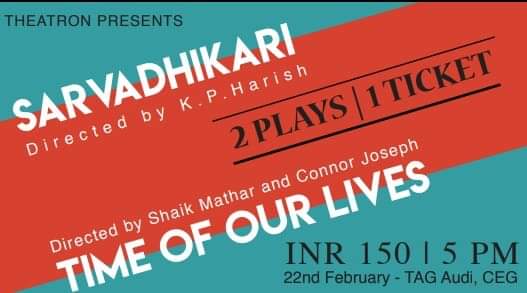