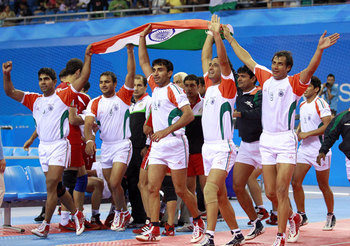 My heart almost sank looking at the picture. While we were so taken back by Aussie's success over India, little did we notice or I would rather say "acknowledge" the victory of the Indian women's kabaddi team striking a hat-trick as world no. 1, a few days ago. Unlike other games that require space and a fair share of expenditure towards equipment, kabaddi does not require either. All you need is a few friends, a grassy field and spare time few times a week. The game demands immense stamina as one needs to be quick on toes, witty and physically strong. Apart from this the player needs to keep chanting "kabaddi kabaddi" adding pressure to withhold his breath.

Inspite of all the hurdles placed forth they managed to prove their worth. It was no easy task to have won the title. Apart from being the proud winners of the World Cup (2012-2014), they are also the winners of the Asian Games (2010, 2014) and South Asain Games (2010). Equal efforts were put but we all know how "graciously" they were welcomed back.
Right after the images arose all over Facebook I could only see the posts and shares of critics complaining the nation for being careless, ignorant, disrespectful and what not.

But how better are we?
How respectful are we?
We did nothing better than just to sit with our mobiles in hand commenting on the ignorance of the government.
Who's being ignorant now? Take a moment to think.
Had we won the Cricket World Cup, half the population of India would have been at the airport welcoming our heroes. And by no means I complain that. But if any other team whose sport is not as recognized as cricket, tennis or any other, achieves tremendous heights there is hardly a soul to take pride in. And the irony is that  kabaddi is OUR sport. A sport that has its deep roots in India.
This probably should have been the most overwhelming news for us to hear. Unfortunately it's not even spoken about anywhere around. Now is the time to react.

Blaming the government proves no point. After all, we are ones who build the nation and the government. So what's the point in blaming an empty space?
Instead of criticizing for the lack of funds or respect, let them be praised for their sweat and toil because they simply deserve to be appreciated.
It takes no longer than two minutes from all of your busy schedules.
Spare time to share and care.

I've done the least I could.
Did you yet?