Review in brief : A Romantic, Scientific, Edge of the seat thriller

Imagine a day without using your android device! We don’t see thrillers often, especially based on a complicated story, leaving us hanging to the edge of our seats throughout, and making us wonder what the next scene might be. This movie is far different from the usual passive storyline. These kind of experimental movies are very rare in the Tamil Cinema Industry. Debut director Ram Prakash Rayappa has served a massive masterpiece! 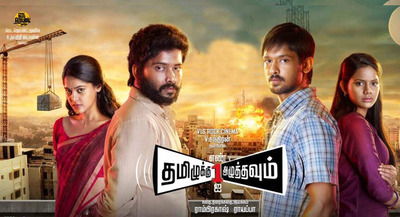 While Nakul plays the role of a techie, Dinesh plays the role of a happy real estate agent who makes us smile in between scenes. Nakul is very keen in following his dreams and also falls in love with a random college student Aishwaya Dutta who visits him for completion of her academic project. Bindu Madhavi plays the role of a simple, cute medical advisor who and also Dinesh’s love interest. Sathish is a taxi driver who innocently makes people laugh. Manobala plays the role of a principal with no brains while Oorvasi breaks a stereotype of ordinary Indian woman lacking in scientific knowledge.

The storyline connecting 3 unrelated couples, is about a solar flare, which wipes out mobile signals for a day in Chennai. Though the facts in the movie are scientifically impossible, people can enjoy the thrill while watching it on screen. This is a low budget film, where no unnecessary money was wasted in songs/dance. The delivery of the dialogues and humor is exceptional. The director emphasizes the fact that the Indian educational system is more related to “Mugging up” the notes and is less practical.

This movie is based on a fresh, new concept which directly says that “Kollywood trend is changing” and it is totally worth watching in the theatre!