Ponmagal Vandhal is a murder mystery courtroom drama set in Ooty, in 2020. Venba (Jyotika), a debutant lawyer, reopens the case of a serial killer Jothi after 15 years. The reason why venba reopens the case and the sequence of true incidents that are unwound later follows up next.

The movie starts off with ‘Petition’ Pethuraj (Bhagyaraj) - a character similar to “Traffic Ramasamy”- filing petitions for minor issues on people around and making them pay fines. He reopens the 2004 ‘Psycho Killer’ woman case and makes his daughter Venba (Jyothika), a debutant lawyer handle it. As most of Pethuraj’s petitions are trivial (Such as petitions against a shopkeeper for finding flies in tea) and as the killer was someone despised by everyone alike, townsmen turn against him and Venba for reopening this particular case. But as the true incidents are revealed by Venba one by one in the courtroom, the public starts supporting her and the cause behind her reopening the case.

Jyothika plays her role as a determined lawyer, striving to prove the truth and taking a stand against the issue of child rape. She shines with her emotional acting . As she is a debutant lawyer, her arguments do not resemble that of adepts'and is helpless when evidence is destroyed and a game-changing witness is killed.Though the movie is slow-paced, Jyothika manages to pull in the audience with her emotional calibre.

Parthiban aces his role as a skilful defense lawyer. Prathap Pothan, as a fair judge, ensures proper judgement. Even though there are many supporting characters, they aren't developed beyond their one-note characteristics and lack depth. In this courtroom drama, more than making scenes interesting through fierceful dialogues or presenting breakthroughs by evidence, tears of the ‘victim’ is shown as an explosive proof. 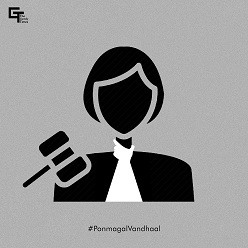 The music by Govind Vasantha adds a valuable note to the film. His expert use of the violin acts as the background score in emotional scenes which adds on to the drama so much. The songs don't disturb the flow because of its pleasing nature, and also because they're used as montages. Ramji has done neat cinematography.

On the whole, the movie carries an important message against child sexual abuse and, though slow-paced, delivers it well. ‘Ponmagal Vandhal’ is definitely worth a watch, thanks to Jyothika’s acting and the strong message conveyed.